The days when treasures seekers were looking for gold are not entirely left behind. If at the beginning of modern epoch, the fighting was for the fields of gold, in our post-modern world is for the fields of gas. Oil and gas are primary sources on energy market, as in the way gold was for the fabrication of coins now a long time ago, so for monetary market. Thus, the development of energy trade, or the consolidation of transportation’s infrastructure depends for many states of the access on these natural resources.

In the summer of 2010, some studies of Houston-gas Company, Noble Energy, have indicated that in Mediterranean Sea of the coast of Israel it might be found sources of gas. The discovery of Leviathan gas field announced in December was one of the biggest discovering from the last decade. By this discovering, Israel assured its independence on energy market and, probably, will be the main exporter of gas in Egypt[i].

Israel is gaining its independence on energy market, but this independent position which might gain it in report with other states is not on the liking of many. Lebanese Government already expressed its intransigent opinion. Leviathan gas field extends into Lebanese waters, so it belongs more to Lebanon than to Israel[ii].

History repeats itself in many situations, circumstances of life, this would be and the example of Romanian Offshore Gas Law for Black Sea quickly adopted in the mid-summer of 2018[iv].

According to new legislative measures and to the vision of Social-Democrats leader, Liviu Dragnea, the 100% percentage of profit resulted from the activity of gas exploitation in Black Sea will be split in two: 50% per cent goes for foreign investors, and the other half will be directed to a special fund for Private-Public Partnership.

The problem noticed by president of the state, Klaus Johannes, with regard to this “fair division” is how the 50% per cent will be directed to a Special National Fund and finally used for the infrastructure projects. Dragnea claims the independence of energy in Romania, but the question is, as in the case of Israel, if they are really “independent”?   As long as the exploitation of their natural resources became an international affair in which are involved not only stakeholders, but also policy men? 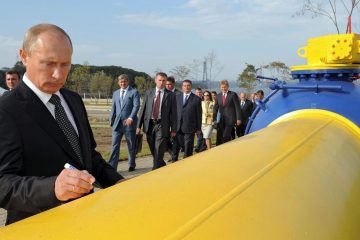 OPINION — How Russia may be isolated on energy trade

Ana-Maria Caminski
Russia
After the division of Russian empire in the end of First World War, a new concept has appeared in the political field. Intermarium was the answer of newly independent states at the Eastern imperialism. … Be More Curious…

In a way that is obvious for anyone, the distinction between politics and economics has disappeared in our post-modern world. Politics became more economically. Is no longer limited at the administration of human affairs, because was transformed itself into a big affair. The effect, the result which has appeared soon after the new legislative measures were voted in July 2018, it was that many foreign investors announced their retirement from Romanian energy market.

Policy leaders claim the energetic independence of Israel, Romania, but are they truly independent? A huge interest for exploitation of gas resources in Mediterranean, Black Seas was manifested by American companies and, in an equal measures, by Russian companies like Gazprom. Of course, the exploitation of gas resources by a Russian company would not be desirable in the case of Israel, as for Romania. All the more now, when an armed conflict has brook out in Black Sea, near the Kerch Strait, at the end of 2018.

Russia has clear interests in exploitation of gas resources from Mediterranean, Black Seas, as it has in the Sea of Azov. Its interests regarding to the Sea of Azov would be around the commercial activity of export, in which the Ukrainian port of Mariupol plays a key role. President Petro Poroshenko accused Russia of “trying to capture the major port of Mariupol to create a land corridor to Crimea”[v].

With whom Israel will coop in selling of Leviathan gas[vi] represents a real challenge for the New Year. 2019 begins with challenges for investors, in a year where the axes of developing the energy market are in a continuous shaping and redefining.

[i] Israel might become the main exporter of gas in Egypt. But this probability is unsure and that because of the discovering made in 2015 of their own giant field of gas named Zohr by the Italian firm ENI. Another possible client for Leviathan Gas is Turkey. Also, the exportation of gas might be developed on East Asian market, as well as on European market. About the exportation of Leviathan gas, see the article written by Eran Azran, The biggest-ever Infrastructure Project in Israel gets under way, Haaretz (February 27, 2017), https://www.haaretz.com/israel-news/the-biggest-ever-infrastructure-project-in-israel-gets-under-way-1.5442428. In this direction, see and the article, Why developing Israel’s Leviathan gas field is a mammoth task, Wharton School, University of Pennsylvania (August 25, 2017), http://knowledge.wharton.upenn.edu/article/developing-israels-leviathan-gas-field-proven-mammoth-task/.

[ii] Soon after the discovering of Leviathan gas field in 2010, Lebanese Government sustained that it extend into Lebanese territory. The statement was revised by the government which in finally recognized that Leviathan gas field belongs to Israel. About this see Maritime border issues between Lebanon and Israel over the gas field, on Offshore Technology site, https://www.offshore-technology.com/projects/leviathan-gas-field-levantine-israel/.