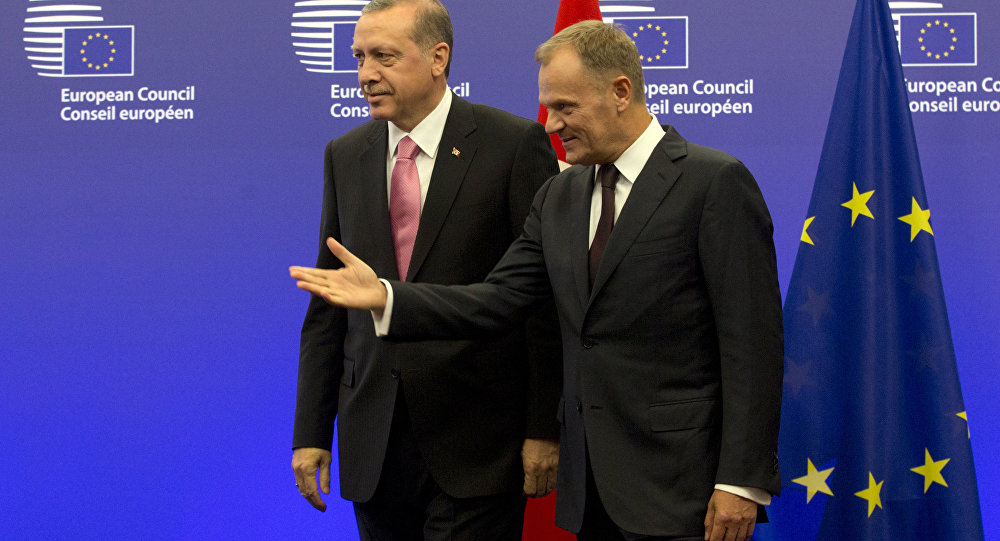 March 4, 2016 is a day that will be long remembered in Turkey.  It will be known as the day when the clandestine war between the AKP government and its friends-turned-foes Fethullah Gülen and the Hizmet movement escalated, putting Turkey on the razor’s edge.  It was the day that the government seized one of Turkey’s largest circulation newspapers, Zaman, and appointed trustees to run it.

If the experience of the recently seized Ipek Holding-run media is any indication, this is merely the opening salvo towards first destroying the newspaper’s credibility by turning it into an AKP mouthpiece, before bankrupting it through eroded readership and massive salaries for the trustees (paid for by the newspaper, of course).  In fact, at the time that this article was written, the first edition of the ‘new’ Zaman had already made its debut on Twitter, with a 180 degree shift in its tone.

More to the point, March 4, 2016 will be known as the day when the AKP and President Erdoğan effectively suspended the Turkish Constitution with respect to press freedom and took the initial concrete step towards outright one-man rule.  The question now is whether March 4 will be remembered as the day when Turkey devolved from a struggling parliamentary democracy and EU candidate to an autocratic third-world backwater.  And the EU will be seen as having had a strong hand in destroying Turkey’s already-weakened democracy, by bargaining with its own values with Erdoğan, who is intent on silencing all dissenting voices and media and thereby securing his desire to become an all-powerful President (for life?).

Many moderates and liberals in the country and the Turkish diaspora were already watching the country’s path under Erdoğan, who has effectively sidelined Prime Minister Davutoğlu, with growing alarm.  Those same people were still hopeful that the country would be diverted from this destructive path by a non-Erdoğanist AKP challenger, the country’s Constitutional Court, pressure from the EU and the US, or even Turkey’s notoriously impotent opposition parties.  None of this has come to pass, of course, though there has been some movement on all fronts.  However, the question on many minds in Turkey is no longer whether the looming abyss of a possible dictatorship can be avoided in some way, but rather how much damage will be done to the country before the country re-emerges from it.

More worrying still, among the at least 50% of the country who still oppose the AKP and Erdoğan, many are beginning to feel that a war with their antagonists is now unavoidable – a dangerous echo to the Turkey of the 1970s where street fighting was commonplace.  The Turkey of that era needed to suffer three years of harsh military rule in order to put itself back on a somewhat democratic track.  For the first time in recent history, there is talk of wishing that the military would step in again, or that a revolution is necessary.  But Turkey’s military is no longer in a position to take the same actions, which may see the pro- and anti-government factions in an ever-escalating conflict as the pressure builds and finally boils over.

It remains true, however, that the other nearly 50% of the country still support the AKP and Erdoğan, sometimes blindly, but sometimes out of fear of retribution.  The latter may explain the lack of serious challenges to Erdoğan from within the AKP until recently, with the growing (though still cautious) outspokenness of former President Abdullah Gül and former Deputy Prime Minister Bülent Arınç.  The policies of the AKP and Erdoğan, however, will ultimately whittle away what support they enjoy.  A military conflict in Syria, potentially the same with Russia, increasing pressure on opposition forces, and most importantly a weakening economy (not least because of the seizure of successful businesses for political reasons) are all increasingly difficult to swallow for even the most fanatical AKP supporter.  The issue of the nearly 3 million refugees from Syria on Turkish soil has already begun to create waves of resentment against the AKP, in an environment where one in ten Turks is unemployed.  The EU has also stumbled badly in this regard, preferring to enable the AKP and Erdoğan’s authoritarian moves with cash and concessions in a bid to keep those same refugees from disrupting the calm of European societies.

In the wake of this turmoil, the main opposition party, the CHP, appears to be preparing to put its supporters on a war footing.  The rhetoric coming from its leaders is increasingly harkening back to the propaganda-style discourse associated with Atatürk used during the Turkish War of Independence (against both the occupying Allies and the Ottoman government itself).  If more than mere rhetoric, this would indicate that battle lines are being drawn within Turkish society, a dangerous development that will put the country on course for a major civil conflict.  Needless to say, the EU and US that need Turkey to remain stable for their own purposes, be it as a bulwark against the refugees flooding Europe to escape the conflicts in the Middle East or as a strategic ally in a region fraught with danger, face a very difficult period in their relationships with the country.

Turkey will ultimately emerge stronger from the ordeal that it is now facing thanks to the AKP and Erdoğan, whose authoritarianisms cannot be sustained indefinitely.  The real question is how much damage is done, and how much blood is spilled before the country’s society self-corrects.  Historically, the military’s interventions, while detrimental to the country’s democracy, also served as a pressure release valve of sorts against the kind of destructive polarization seen in present-day Turkey.  The country no longer has this valve, however, and the pressure keeps building.

Nor will the EU find willing allies among Turkey’s opposition any longer.  The EU, which naively protected the AKP and Erdoğan in the early 2000s, is now seen as more of a liability for Turkey’s democracy than an ideal worth striving for.  In the wake of what can only be described as extortion using refugees, the AKP and Erdoğan secured some €3 billion in EU aid to Turkey, despite repeatedly threatening to pack migrants onto buses and send them directly to the border if the money wasn’t provided.  Worse still, EU officials allegedly delayed the release of the progress report on Turkey’s EU accession process, which was full to the brim with criticisms over the country’s descent into authoritarianism, until after the November 1, 2015 elections that swept the AKP back to its parliamentary majority.  For many liberals and moderates, this was a clear example of the EU betraying its own democratic principles and sacrificing Turkey’s future in order to address present-day crises.  Simply put, the EU is no longer seen as an honest partner in Turkey’s development, and has alienated much of the population in one way or another.  Ultimately, the AKP and Erdoğan’s greed and lust for power are unlikely to be satisfied by what the EU has been willing to offer thus far, and it is therefore almost certain that the EU is dealing with a ghost from Europe’s own violent past: appeasement. 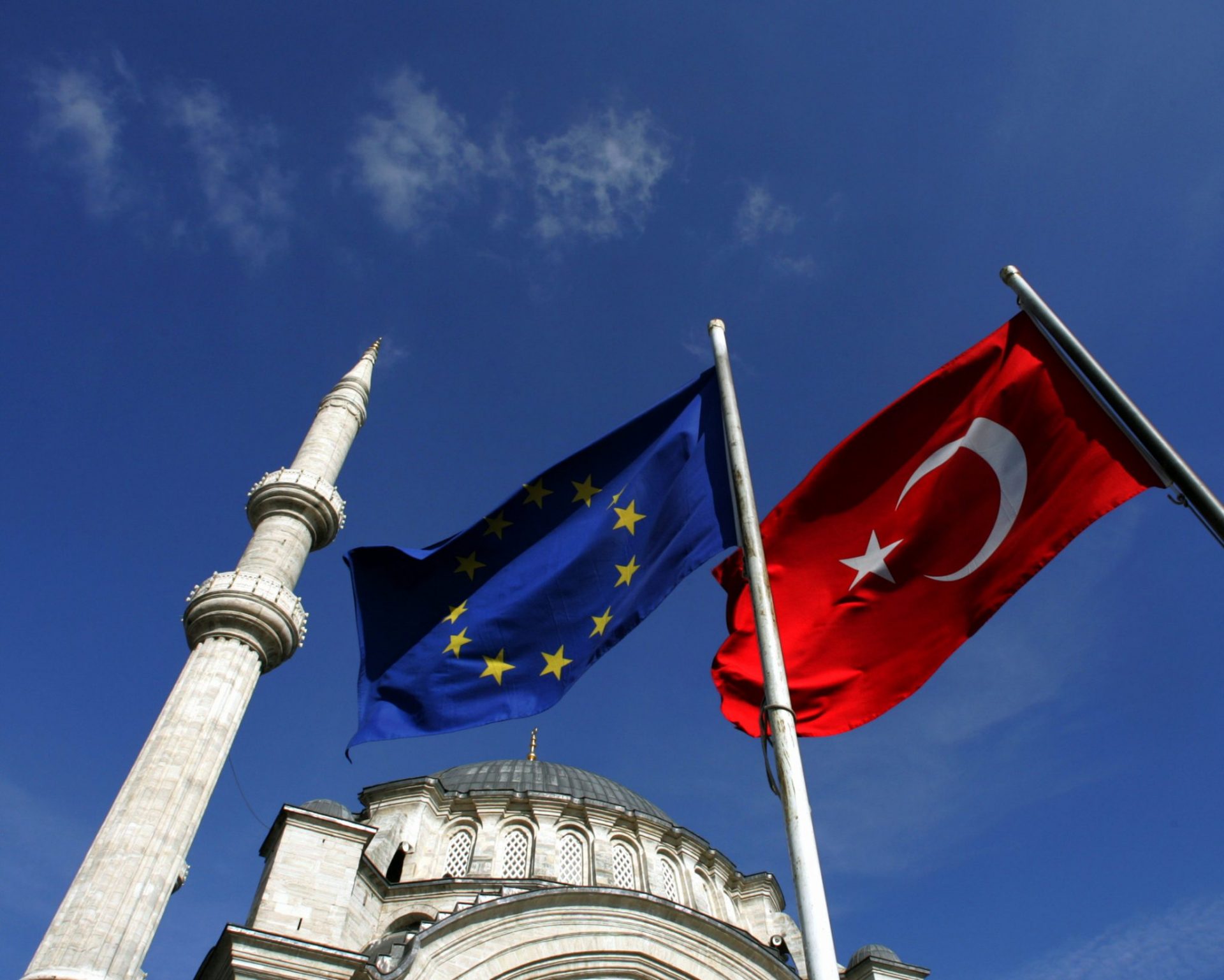 Between a rock and a hard place: how EU should deal with “Turkish issue”