Five years ago Croatia became EU’s 28th member-state. The accession process was seen as in important step for the Balkan region and the “Ex-Yugoslav area” to become Europeanized.

One interesting thing was that Croatia’s accession in fact was in contradiction with the views of its first president Franjo Tudjman. Before he died, as a nationalist and authoritarian politician, Tudjman made comments that it was not in Croatia’s interest to join the EU. Why?

According to Tudjman, EU was just as Yugoslavia, namely a “liberal experiment” doomed to fail and should collapse. Almost 25 years later one can see that Tudjman’s conclusions were wrong. The EU is still functioning by being more integrated than ever, despite the different problems as Brexit, institutional distrust and slow economic recovery.

And while Yugoslavia was an authoritarian experiment lacking democracy and freedom, the EU is still considered to be the worlds` most prominent example of regional integration, supranational democracy and multi-level governance.

However, is it useful to present the EU as an “experiment” in media, academic or popular narratives in order to inspire people? Keeping in mind all the crisis since 2010 which have affected millions Europeans and also that the term experiment in political discussions often has a negative connotation.

The EU is still influenced by the problems that resulted in the beginning of the 90’s marked by the beginning of the end of the “permissive consensus”. Creation of the Single European Act led to political and economic integration which also resulted in contradictions and expectations. Suddenly, a larger amount of people could feel that there was a new kind of story they were now being a part of.

As well as that was not the same story which was told to them before. Officially it was about trade, movement and cooperation while unofficially it was about a regulated market, citizenship and governance. Also it was about a story that directly influenced our individual and collective identifications where citizens became categorized as winners and losers of the European integration.

So where is the “European story” heading at the moment? As historian Yuval Harari writes in his latest book “21 lessons for 21st century” humans need ideas, meaningfulness and stories in order to organize themselves, cooperate and solve problems. His book devotes several pages to EU: development and its relevance for the future of our human civilization.

According to Harari, at the moment there is a big collision, or a gap, between global problems and local identifications which manifests itself in a crisis that also is negatively influencing on the EU – the world’s greatest multicultural experiment based on the universal liberal values. This is taking place due to the challenges with immigration and integration but also when it comes to views on European identification.

Lack of visions, meaningful and inspirational storytelling often leads to feelings of disillusionment and uncertainty. Something that in Europe often gets filled by nationalist communication where people feel that they need to choose between a nostalgic fantasy of a better past and a feeling of an uncertain future. 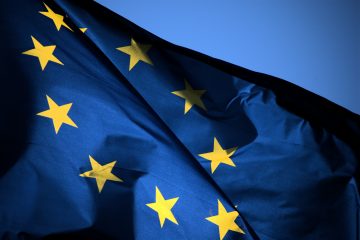 Leonardo Veneziani
Inside Europe
In the morning of May 9th, 1950, the then Foreign Minister of France, Robert Schuman, called a press conference to be held at 4 P.M. in the Quai d’Orsay – the seat of the French Ministry for Foreign Affairs… Be More Curious…

An important thing for Europe’s future when it comes to identification is to remember that nationalism is after all an idea. Historically, nationalism has been used through indoctrination to make larger number of people to cooperate for different interests as labour and military.

In 19th century this led to Prussians, Swabians, and Bavarians becoming Germans while Normans, Bretons and Gascons became French. Therefore, in Harari’s view the future of Europe could lead to Frenchs, Slovaks and Danes feeling more as Europeans.

Therefore, the EU can be seen as an institutional development aiming to bring more people together and enabling them to cooperate and to identify themselves with the common institutions as democracy and rule of law. One big challenge at the moment is how Europeans can deal with humanitarian immigration and adaptation of refugees and asylum seekers if for example many Germans and Greeks do not always feel attached to European identification.

In Harari’s views, if the EU succeeds in the future by solving several problems, its “experimental recipe” can be copied and transferred to the global level, which would mean bringing more peace, prosperity and progress to the rest of the world. As Harari points out:

“The rest of the world can hopefully learn from the European example. Even on a united planet there will be plenty of room for the kind of patriotism that celebrates the uniqueness of my nation and stresses my special obligations towards it. Yet if we want to survive and flourish, humankind has little choice but to complement such local loyalties with substantial obligations towards a global community.”

One of the strongest aspects of the European identification is its pluralism and multi-levelness from local to union level. It is also more inclusive, based on universal values and more cosmopolitan views on society and citizenship. Forming a more united or a federal Europe would not mean abolishing all national or country level identifications such as languages etc.

The future of Europe is therefore about the further development of our global-human civilization where billions of people need to have common identifications, institutions and commitments in order to solve the global problems which are vital for our wellbeing and survival on the Earth.