Last Thursday, the State court of the northern Schleswig-Holstein formally accepted the petition made by Spain, through a European Arrest Warrant (EAW), to extradite Carles Puigdemont. The former president of Catalonia, who fled Spain after the failed bid on independence for the region, had an EAW issued on him on the grounds of misuse of public funds and rebellion.

According to the Spanish Supreme Court, the former offense would have been committed by allocating millions of euros to the organisation and celebration of the illegal referendum on independence, on October 1st; the latter, however, would require a violent and public rising against the Spanish constitutional order.

In Thursday’s press release, the German court decided to extradite Mr. Puigdemont on the grounds of embezzlement, accepting the thesis of the Spanish Supreme Court; Schleswig-Holstein court considers Mr. Puigdemont to be ‘co-responsible for incurring financial obligations at public expense’. Nonetheless, the court rejected the argument of the Spanish Supreme Court on the more serious crime of rebellion, as it did not consider the charges on Mr. Puigdemont to be applicable to that offense, based on the evidence provided by Spanish courts.

In order for Germany to extradite him, the actions of which Mr. Puigdemont is accusedshould be applicable to an offense sanctioned by the German Criminal Code; in this particular case, the German most close equivalents of the Spanish crime of rebellion would be high treason and rioting. However, the German court ruled the following:

This disagreement between the German State Court and the Spanish Supreme Court leaves the latter with three different options. The first one would be to accept the German ruling and try Mr. Puigdemont in Spain on the sole grounds of embezzlement, but not on rebellion; this option is quite unlikely, especially given that both courts are not on an equivalent level of jurisdiction. Besides, the legal possibility for Mr. Puigdemont to return to Barcelona and end up avoiding prison if he is only convicted for embezzlement would also make it possible for him to be re-appointed President of Catalonia.

The second option would be for the Spanish Supreme Court to simply withdraw the European Arrest Warrant, meaning that the arrest of Carles Puigdemont would only be possible if he entered Spain or another EU State, so that the EAW could be reactivated and the process restarted in that country.

The third option would paralyse and extend considerably the ongoing judicial process; the Spanish Supreme Court could request a preliminary ruling from the EU Court of Justice on the subject, on the grounds that German courts should not have ruled on the content of the case (level of violence, threat to constitutional order, etc.), but only on the form of it (recognition of equivalent offenses in German law to those claimed by Spain). The decision is now on the hands of judge Llarena of the Supreme Court.

From the political perspective, Spanish PM Pedro Sánchez (PSOE) refused to comment on the German ruling, stating that he has always respected the same key principle as leader of the opposition and now as PM:

“Judicial decisions are not to be commented, they must be just respected, and that is what this government will do, be it in Spain, in Belgium, in Germany, or wherever”.

He made this declaration despite having strongly criticised other judicial decisions, the last of them being in April 2018. Later on, he stated that

“the important thing in terms of justice is that the people involved in the events that took place during the last semester of 2017 must be tried by Spanish courts, and that will happen”.

From the side of the main opposition party, the Partido Popular (PP), Esteban González Pons (EPP Vice-Chair at the European Parliament) has been the loudest voice, as the party is currently in the middle of a primary campaign to designate a new leader. Mr. González Pons criticised the European Arrest Warrant, claiming its design is useless, despite the fact that Spain was one of its main sponsors from 1996 until its introduction in 2002, during the Spanish presidency of the EU (also under Aznar’s government, from PP).

Moreover, he even demanded President Sánchez to suspend the application in Spain of the Schengen Treaty, the 1985 agreement, integrated into EU Law in 1997, that allows for freedom of movement across the Union. Interviewed on Friday, Mr. González Pons affirmed that demanding the suspension of Schengen because of the German ruling was ‘not a radical, but a usual measure’, as Schengen is ‘currently suspended, partially or totally, in six States’. 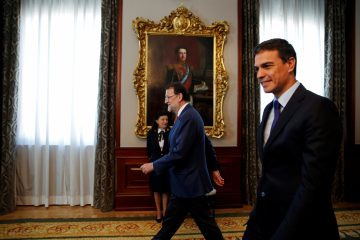 Arnau Perello
Inside Europe
383
Nine years after the disclosure of a huge corruption scandal, Mariano Rajoy and his Popular Party have finally been ousted from government. The new PM, Pedro Sánchez, holds a very weak majority in the Spani… Be More Curious…

The fact is, Austria, Denmark, Germany, and Sweden, have temporarily reintroduced controls in some of their borders due to the ‘security situation in Europe and threats resulting from the continuous significant secondary movements’, with France having reintroduced them in all of its borders due to a ‘persistent terrorist threat’. González Pons claimed that ‘if the Spanish government does not protest, we will be irrelevant and nobody will know how angry we are’, adding that ‘nobody listens to you in Europe if you speak in a low voice. Spain and Pedro Sánchez must react without insecurity, like great countries do’.

The no-comment policy on judicial decisions has traditionally been the party line, as well as its main argument against the celebration of the illegal referendum held in Catalonia on October 1st, 2017, which had been declared unconstitutional by the Spanish Constitutional Court.

However, Pablo Casado, one of the two contenders for the PP leadership, also stated his opinion on the German ruling, claiming that he would not tolerate ‘that kind of humiliation to Spain’ if he ends up leading the party. Soraya Sáenz de Santamaría, his rival and previous VP to ex-president Mariano Rajoy, expressed her ‘maximum respect’ for the German ruling.

Both the conservative PP (EPP) and the liberal Ciudadanos (ALDE) have raised their concerns about the nature of the European Arrest Warrant. The EAW was introduced with the aim of supressing the political and diplomatic procedures of traditional extradition among EU countries, so that their judicial authorities could directly issue the arrest and surrender of their nationals in other countries without diplomatic or political intervention.

However, although this system is supposed to be based on trust and recognition among EU countries and their legal systems, the Decision that regulates EAW sets a closed list of offenses that must ‘give rise to surrender pursuant to a European arrest warrant’ without further verification of the issued country, as long as the offense is punishable in the issuing one.

Any offense not contained in that list would require verification from the issued member State (in this case, Germany), and that is what happened with the rebellion charge against Carles Puigdemont. Almost all of the offenses with political ramifications, except for terrorism, were left aside the mentioned list.

Although several separatist leaders are celebrating the German ruling as a victory, as it rejects the Spanish position on rebellion, the fact is that it also rejects the separatist stance on the existence of political prisoners in Spain, as it rules out ‘that the extradition request aims at politically persecuting Carles Puigdemont in Spain, a concern raised by Puigdemont’.

The court affirms ‘it is fallacious to assume such a thing of Spain, a member of the value community and the common legal community of the European Union. The Senate fully trusts the Spanish Judiciary to comply with the requirements of national as well as Community law’.

Beyond the specific developments of the Catalan issue, and regarding the European Union stance against nationalism and for rule-based systems, member States may do well in considering what the implications of being ‘a member of the value community and the common legal community of the European Union’ should be. For the sake of the Union.