Search
Home
Research AreaBeyond EuropeIran
ShareTweet
By Amin Ghazaei
Ghazaei is a writer and sociologist residing in Amsterdam. He is a political activist and translator of various books on politics, philosophy and sociology. You can follow him on Twitter.

The ever-increasing collective will and fervent hope of overthrowing the oppressive Islamic regime in Iran has generated heated discussions among both the political opposition and ordinary people about the favored structure for a future state apparatus.

Amongst other issues, people and political parties have largely been polarized between proponents of a unitary state and supporters of federalism; advocates of both argue that their own solution will prevent the country from falling into dissolution and endless civil war as seen in Syria.

While the first group presumes cynically that conferring greater power on local ethnic states would pave the way for subsequent separation, the latter sees federalism as the only way to strike a mutually acceptable bargain between the center and peripheral regions and to ensure the mutual satisfaction and cooperation in order to safeguard the territorial integrity of the country.

Practically, insofar as the territorial integrity matters, the latter’s argument sounds more compelling simply because it would ensure a scenario in which a centralist party would have great difficulty in gaining absolute power and dominating others in the aftermath of the eventual revolution, which is now widely seen as inevitable, with the only argument being over when, rather than if, this will happen.

Given the decentralized and multi-ethnic nature of the revolutionary opposition, only fair bargaining over the distribution of power can satisfy the involved parties, ensuring a system in which ethnic minorities can enjoy relative autonomy, which they have been denied under successive Iranian rulers for at least almost seventy years, and restoring their trust so that they are more likely to envision their prosperity as lying within the current boundaries of Iran.

This dispute has some ethical implications as well. While centralists resort to invoking alarmist sentiments, such as fear of dissolution or demonization of the so-called separatists as traitors, federalists seeks to ensure Iran’s territorial integrity through negotiation and promises. At the heart of this discussion lie two mutually incompatible approaches towards the social contract as articulated in classic social theories. The centralist approach is apparently based on a Hobbesian view regarding the social contract as a deal with a central power to avoid dissolution and “the war of all against all” at the expense of the multiplicity of cultures and ethnicities within a territory.

To put it simply, centralists’ worldview invokes the fear of dissolution of the country and by doing so, it betrays the idea of unifying various ethnic groups in the struggle against the regime. The centralists’ Hobbesian worldview not only fails to maintain territorial integrity at the end of the day, but is also wholly self-defeating through strengthening mistrust of the central authorities among Kurds, Ahwazis, Turks, Turkmen, Balochis, etc., without whose participation the overthrow of the regime is inconceivable. 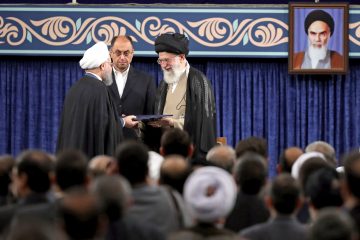 Rahim Hamid
Beyond Europe, Iran
All opinions in this column reflect view of the autor(s), not of Vocal Europe.
The Iranian regime has two faces that it presents to the world.  The first is presented with the usual hardline sectarian mi… Be More Curious…

In contrast, federalists view the social contract as a bargain among individuals to reach an agreement in which everybody can pursue their own interest in their own ways as the Lockean view of the social contract suggests. In this spirit, far from being merely a proposal for state-building, federalism invokes the sensibilities of hope, trust, autonomy, collaboration and the aesthetic ideal of “unity in multiplicity “. In a nutshell, self-rule not only draws a pleasing and harmonious picture of the future, but also nourishes the flower of hope, uniting the current struggle of peoples with the same goal but with various demands and ideals.

Regardless of ethical and strategic reasons for federalism, we can suggest the following reasons for supporting federalism as being more cogent than either a unitary system or secession:

I would like to emphasize that federalism has to be seen as an integral part of a broader project to decentralize governance, to transfer the power to a common body, and to realize a “direct democracy” reliant on not merely ideals but on their practical application using technology which promises a decentralized future in finance, governance, economy and communication.

In Iran’s political arena, some effort is being devoted to this cause. Among other groups, the “Third frontier” consisting of political activists, social theorists and experts in various fields, wholeheartedly promotes decentralization and federalism. It has succeeded in serving as an open platform to bring together various ethnic movements and parties. Working within this platform, ethnic movements can raise their voice and the issues of local people all over the country. Further step set by ten ethnic parties who have come up with a consensus document in which they emphasize on Federalism.

More than any other central-oriented traditional opposition, these voices resonates with the needs and demands of long suppressed Iranian people who so far have found themselves helpless and forgotten. Federalism echoes the unheard voice of ethnic minorities who, this time, are determined not to put trust in any central form of government. It is in federalism that they can theorize the need for both unity and multiplicity. Tomorrow is their turn.