It has become customary in Spain, whenever a so-called socialist cabinet starts its new mandate, to approve some eye-catching law. In this way, the new government always looks more liberal than the previous one – invariably controlled by the Popular Party and its loyal allies.

If at the end of the mandate no relevant law concerning the well-being of the citizens has found its way across the legislature, at least there will be – hopefully – some success to talk about.

This time Sánchez’s government approved the exhumation of Franco’s rests from the Valley of Fallen – a giant mausoleum built using prisoners of war as a labour force. The place constitutes an anomaly in Western Europe, as it is worshipped by thousands of fascist devotees.

The move does not include any other measure, like the cancellation of the judicial sentences promulgated during the dictatorship, nor the societal reparation of the repression victims during the white terror, nor the opening of mass graves  – Spain is second only to Cambodia in its number. Still, the right-wing opposition parties are against the exhumation, and even historical members of the ruling PSOE have signed a manifesto opposing it, along with several personalities linked to the old regime.

However, the issue is not if the Caudillo’s rests are buried in the Valley of the Fallen or in the Royal Palace of El Pardo, along with his wife’s remains, but how much of his legacy, if any, will be dismantled in the next years. We have to remember that today one in every four existing laws in Spain has been signed by Francisco Franco.

Unlike in other European states, where dictatorships were overthrown as a result of strong popular campaigns, in Spain, the last autocracy of Western Europe,  the Generalísimo died in his bed – as it is often said here- after having ruled the country for almost forty years. 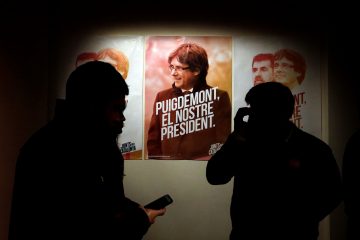 Nearly a year of pre-trial imprisonment with no legal grounds, despite German Court ruling

Arnau Perello
Inside Europe
Two events have weakened Spain’s reputation in the last month. The first one is the case of the €4 billion submarines that are too big for its own dock – after the modification that allowed them to floa… Be More Curious…

Since the regime officials in power at the time had full control over the judiciary, the police and military forces – as well as over the mass media- they held a substantial negotiating power when they offered a take-it-or-leave-it agreement to the weak opposition forces. And the democracy-hungry population had no better choice when they were asked to vote on this deal in a referendum.

Under that deal, Francoists had to keep control over the key power structures in exchange for democracy -even if in some respects this democracy was only nominal. The Spanish Monarchy, the Catholic Church, the High Judges, the big landowners, the bankers, the oligopolies, the military and police forces – all of them associated to the Franco’s regime – had to hold their privileges, just as if this had been written in the dictator’s will.

Just to start with, today over 250,000 people in Spain (named “aforados”) enjoy judicial immunity and can be tried only by High Courts. These people are the members of the High Courts themselves, the police forces (including the military Guardia Civil), government members, Members of Parliament,  state auditors and, of course, all members of the Royal family, including the King Emeritus – who according to several sources owns an estimated fortune of up to €2billion and has recently been accused of tax evasion.

Although Sánchez pledged a reform of the laws that protect aforados, he recently clarified that nobody except government members and MPs will lose their immunity. He also explained that no regular court will be able to judge them for crimes related to their positions. It will escape no one’s attention that this is very close to maintaining their immunity as well.

In this way, the judges that have allegedly perverted the course of justice will retain their immunity even if the proposed reform is approved. There are many recent cases of justice perversion in Spain, like that of the eight Basque youths recently condemned to long prison sentences (up to 13 years) for a bar fight involving members of the military police.  Or that of the Peruvian student who spent 16 months in Spanish jails in a special isolation regime, falsely accused of terrorism.  Or the imprisonment of Catalan politicians for their political credo, still awaiting their sentences in prison.

Also, with this lack of accountability of judges and police forces, it is not surprising that Spain is leading the world’s ranking of artists condemned to prison terms because of their lyrics -ahead of China and Iran.

On the other hand, numerous laws maintain the privileges of the Catholic Church, like a blasphemy law recently used by a judge to charge an actor who now faces a one-year prison sentence for mocking God. Other bills have been used by several bishops between 2014 and 2015 to appropriate hundreds of public and private properties. These bills were abolished a couple of years ago, but their effects have minimal chances of being reverted since this government will hardly legislate retroactively to return the properties to their legitimate owners.

In 2017, the European Court of Justice ruled that some tax exemptions of the Spanish Catholic Church might be illegal. Several sources estimate its total tax break each year is not less than €2 billion. This figure adds to  the public funding of faith schools, and to the salaries of the teachers appointed by the Church to offer religious education in State schools.

Another long-standing problem inherited from Francoist Spain is that of the land distribution in the central and southern regions, where nearly half of the land is owned by a few big landowners – many of them aristocrats. They are currently the biggest recipients of European aid money for agriculture, although nearly half of their land remains unused. A timid regional law of 1984  did not limit the size of the large states as Italy did in 1950 using Marshall’s plan funding (Southern Italy had inherited the feudal-like distribution of land from Spain).

The lack of reform in these regions is the primary cause of their vast structural unemployment. This would be impossible to maintain without the cornerstone of the deal: the lack of vital tax collection capacity for all administrations except the central power and the regions of Navarre and the Basque country. In this way, a massive -and permanent- financial support is withdrawn from the Eastern territories (Catalonia, Valencia and The Balearic Islands) to support controversial public investments in the rest of the State. What is really troubling is that whereas the recipient regions have not converged towards the EU employment average in forty years, the donor regions are not converging either.

Even though nobody living in Spain under 58 years of age has ever voted the deal,  it is difficult to imagine how Sánchez’s government is going to pass even a minor reform of the Spanish Constitution to put an end to any of the mentioned privileges. Probably the most famous of Franco’s quotes in Spain is  “everything is well and truly tied up” [“todo queda atado y bien atado”]. He certainly would be delighted if he knew that, forty-three years after his death, the foundations of a constitution mentored by his followers are virtually impossible to reform.