On 30 September 2018, citizens of Macedonia will have an opportunity to strongly influence their country’s future. By voting for or against the Athens-Skopje agreement, they will significantly influence Macedonia’s Euro-Atlantic integrations. History will certainly be made – the only question is what kind.

The long road to referendum

The name dispute between Macedonia and Greece has been lasting ever since the former country became independent following the collapse of Yugoslavia. Greece did not want to allow a sovereign nation to bear the name of its historic province.

A compromise was reached in 1993, when the new country was admitted to the United Nations under the name of Former Yugoslav Republic of Macedonia. However, its path towards NATO and EU remained blocked by Greece, despite it becoming a candidate for the latter in 2005.

On 12 June this year, after several months of intensive contacts between Foreign Ministers of the two countries, Nikola Dimitrov and Nikos Kotzias, an agreement was finally reached. It was signed five days later by the Prime Ministers Zoran Zaev and Alexis Tzipras in Prespa. 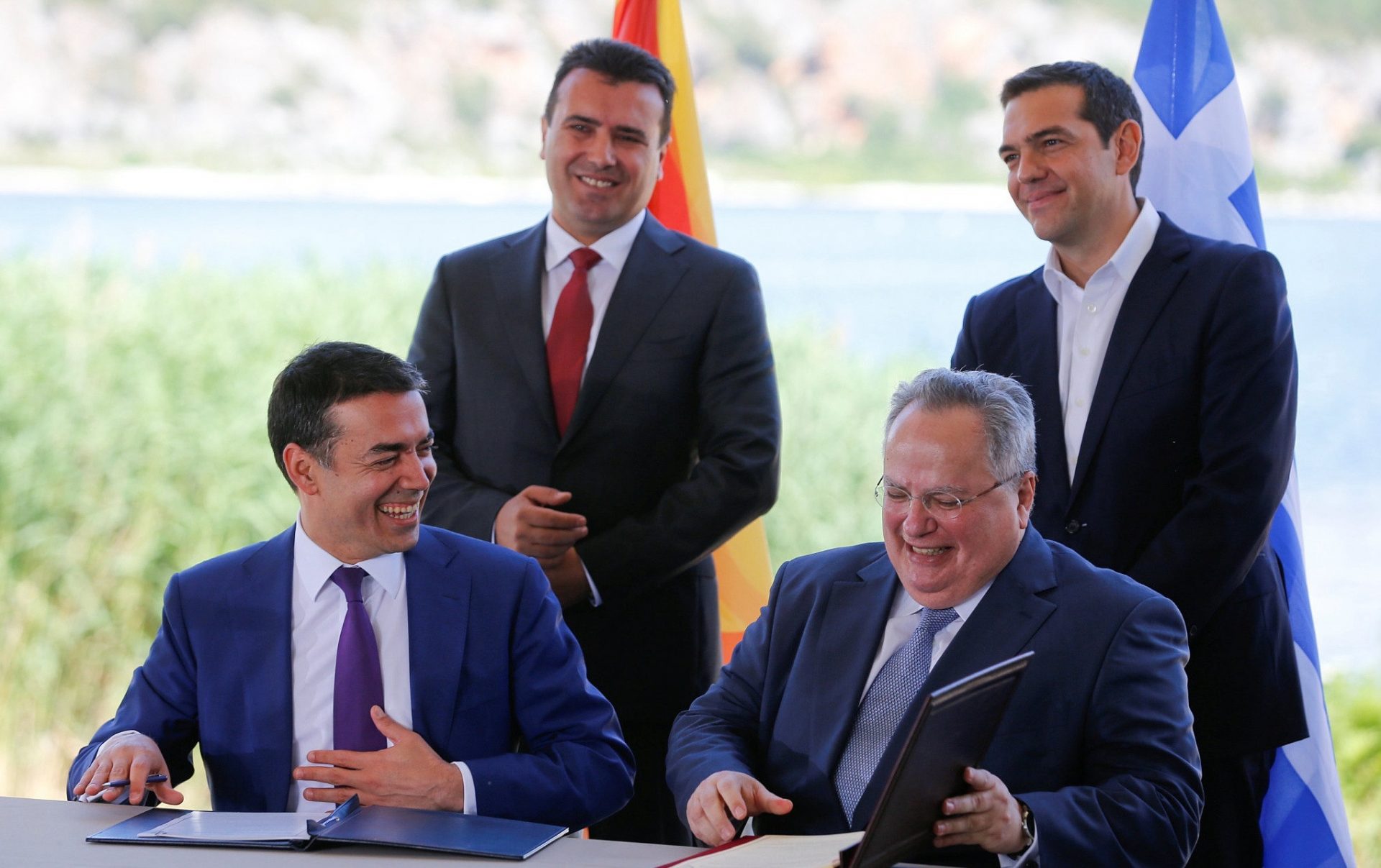 Under the Article 1.3 of the Agreement, “the official name of the country will be changed to “the Republic of North Macedonia” , while Greece, under the Article 2.1, “agrees not to object to the application by or the membership of the Second Party in international, multilateral or regional Organizations.”

After the Agreement was ratified in the Macedonia’s Parliament on 5 July, a referendum was called for 30 September. The question reads: “Are you in favour of EU and NATO membership by accepting the Agreement between Republic of Macedonia and Republic of Greece?” The decision was made by 68 MPs who voted for calling the referendum, while members of the opposition were absent from the voting.

What is at stake?

The referendum question was criticized by some for not being formulated in a neutral way. Adding EU and NATO membership has been viewed as government’s effort to maximize the chances for a positive outcome.

However, Macedonia’s EU and NATO memberships, strongly supported by the majority of the population, really do siginificantly depend on accepting the Agreement. In less than a month after it was signed, Macedonia was invited to become NATO’s 30th member, while the screening process for the beginning of EU accession negotiations was launched as well.

Both NATO General Secretary Jens Stoltenberg and EU Commissioner for Enlargement Negotiations Johannes Hahn used the opportunities to congratulate Macedonia on reaching “a historic agreement” with Greece. The obstacle that its rejection by the citizens would represent was stressed on both occasions.

Even though the upcoming referendum will be consultative and therefore its result will not have a direct impact on the success of the Agreement, its failure would nevertheless represent a serious blow to the Macedonian government, as it could damage the legitimacy of such a major change.

Even before the official launch of the campaign on 30 August, one month ahead of the vote, geopolitical interests interfered in the process. Russia has been accused on several occasions of trying to undermine the agreement.

The most important accusation occurred during the mid-July. As Balkan Insightreported Prime Minister Zaev stated for BuzzFeed News that his government has received information about Greek businessmen “sympathetic to the Russian cause” who are paying Macedonians between $13,000 and $21,000 to cause violence ahead of the referendum.

Diplomatic ties between Russia and Greece also suffered a setback after two diplomats of the former country were expelled by the latter. They were accused of trying to gain influence by bribing the state officials and Orthodox priests in order to fuel opposition to the Agreement from the Greek side.

Since these events, no further instances of Russia’s meddling have been broght under the spotlight. Dimitar Bechev, research fellow at the Center of Slavic, Eurasian, and East European Studies at the University of North Carolina and member of the Balkans in Europe Policy Advisory Group (BiEPAG), does not believe any new major developments should be expected.

“I do not expect any major move/statement from the Ministry of Foreign Affairs. Rather, low key propaganda through the usual channels  – a bunch of web portals plus the United Macedonia party of Janko Bačev – will continue” — Bechev stated for European Western Balkans.

The official campaign was launched on 30 August, when a coalition of about 30 political parties, lead by Zaev’s SDSM and ethnic-Albanian DUI, was formed. The invitation was also extended to VRMO-DPMNE, country’s main opposition party that previously refused to vote on the adoption of the Agreement and organization of the referendum.

Whether the party that ruled Macedonia for ten years before losing power in 2017 will campaign against the referendum and call its supporters to reject or boycott it is still unknown.

There are, nonetheless, those that have already moved in that direction. Already at the beginning of August, a coalition of 28 small parties and NGOs lead by pro-Russian United Macedonia party launched the campaign “Macedonia Boycotts”. Their aim is to discourage citiznes from casting their vote, thus decreasing the turnout bellow 50% and leaving the referendum unsuccessful.

“Let’s boycott the September 30 referendum and save Macedonia’s centuries-old name,” urged above mentioned Janko Bačev, leader of the United Macedonia.

President of Macedonia, VMRO-affiliated Gjorge Ivanov, also expressed his opposition to the Agreement by refusing to sign it into law the first time it was voted in the parliament. On the other hand, founders of his party, lead by its first chairman Ljubčo Georgievski,have urged the citizens to vote “yes” and secure Macedonia’s Euro-Atlantic future.

What are the polls saying?

According to the few polls that have so far been conducted, majority of citizens will vote in favour of the Agreement. However, it is not an absolute majority and many are still undiceded or choosing not to participate. The visits from high NATO and EU figures, such as Stoltenberg, Austrian Chancellor Sebastian Kurz and his German counterpart Angela Merkel (her first official visit to Macedonia) were doubtless intended to boost support for the “YES” campaign.

One of the most recent surveys was conducted by the Institute for Democracy ‘Societas Civilis’ in cooperation with the Macedonian Center for International Cooperation and TV Telma, from 7 to 25 August. According to Zoran Nechev, Head of the Center for EU integration at ‘Societas Civilis’ and member of the Balkans in Europe Policy Advisory Group (BiEPAG), referendum’s success is not guaranteed.

As he explains, “while according to the survey 57,8% said they would vote on the referendum, additional analysis was done to account for the different probabilities of voting and the large difference between the population and voter registry.”

“It will be rather difficult to reach the census without VMRO-DPMNE calling their electorate to vote either for or against. There are however chances the “Yes” campaign can motivate additional voters, but these are rather limited”, said Nechev for EWB.

On the more positive side for the referendum supporters, 70% of those that are planning to vote will, in fact, vote in favour of the Agreement, while only 15% will vote against. Two main reasons for support, Nechev emphasises, are joining EU and NATO, as well as solving the long-standing dispute.

To conclude, much depends on VMRO-DPMNE’s decision. The still largest individual party in the country seems to be the x-factor of this campaign. Also, the fact that there are almost three weeks left for campaigning should not be overseen. In the end, the importance of this event has to be reiterated. One does not have to look further than the Brexit referendum to see the impact these kinds of decisions have on countries and their citizens.