There have been a few moments in the last century of Modern Europe’s history that shaped the structure of the continent for the next decades. Without any doubt, World War One and World War Two have truly been defined as cornerstone of the destiny of Europe, and its role in the global stage.

In fact, the two World Wars were a U-turning point for Europe: as result of the First World War, most of Empires that played politics for the previous four centuries crumbled, thus side-lining the whole continent and moving the centre of World Politics to the USA and USSR.

The Second World War signalled that Europe was ready to surrender to the temptation of Autocracy, Dictatorship and Extremism, rejecting the same liberal democracy it helped shaping.

The competition for power and World dominance obliged European Nation to choose a side: either defend democracy, liberty, freedom and equality, or choose authoritarianism, restrictions to personal freedom, populism. This, in fact, demonstrated that European powers were fighting one another in what might be called “European Civil Wars”. The result of both was, indeed, the destruction of Europe, millions of deaths, and its relegation to irrelevance.

However, Europe started regaining its World prestige a few years later, when the process for European Integration started with the Schuman Declaration (May 9th, 1950). For the first time in its history, the European Continent was ready to say farewell to arms and to resolve conflicts through cooperation, gavels in courtrooms and free trade. The final objective of the Founding Fathers was to create the United State of Europe, to finally gain a place in the Sun as World Superpower.

When the European Nationhood started to flourish in the Middle Ages, it was said that a State is formed by two things: currency and weapons. There was, anyhow, a moment in this history of success when the European Federation seemed to be handy, and when one of those two requirements were met, i.e. the creation of the European Defence Community.

As result of the disastrous defeat of Nazi Germany in World War Two, the Wehrmacht, that is the Nazi German Army, was totally erased as condition of the peace treaty. Germany was thus divided into two entities: The German Federal Republic – under American, British and French influence – and the German Democratic Republic – one of the satellites of the Soviet Union.

In 1955, West Germany was armed by the USA in accordance with NATO rules. The French, under the command of the war hero General De Gaulle, were scared by the resurgence of the German Army. Therefore, they proposed the Pleven Plan, which foresaw a European Military committee to oversee the new German Army in order not to give decision-making power to German officials and generals. 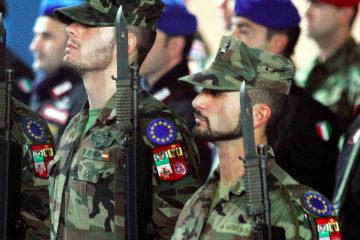 Editorial
Inside Europe
On 14-15 February, 2018 NATO Defence Ministers will meet in Brussels again to discuss the main threats the world faces nowadays. NATO consists of 29 member states but 22 of them are simultaneously the EU member… Be More Curious…

However, the dream of seeing European States’ armies under a single banner soon vanished: the French National Assembly rejected the Treaty on August 30th, 1954, thus ending the project of a common European army.

Today, August 30th, 2018, it is 64 years since that project failed. In recent years, though, there have been increased calls for European unity even in military matters. It is in this renewed effort to achieve collaboration in military affairs that several projects from the European Union – for example, the PESCO, the most important project going on – that it is time to recreate cooperation in matter.

The World is changing fast. Russia, even if no longer under Soviet-type government, is still a threat to the security of the European continent – if not for military matters strictly speaking, for cybersecurity and false electoral propaganda (just think about fake news).

While China is surging as World superpower with its military and economic factors – China investment in Africa has reached a peak of $175 billion over $14 billion from the USA –, thus challenging the primary role the USA has maintained since the beginning of the Cold War, the USA, with the election of Donald Trump in 2016 to the White House, has become a less reliant partner in military protection. It is therefore time, as stated by President Trump as well, for Europe to take its destiny in hand and start paying for its own defence.

Even if NATO remains one of the cornerstone for European Defence with American protection and its nuclear power as deterrent, a European Army is required for the creation of European capability to defend itself. If we look at the figures in the image next to the text, we can see a comparison between European and American defence: even if Europe spends overall almost half of total American spending, its investment per soldier is almost ¼ of the American.

Moreover, European states use a wide variety of models and types of weapons, fighters, tanks and destroyers – that is, in all the branches of the Army (land, sea and air). This, therefore, leads to higher costs of maintenance, and less uniformity in models. The solution is, as already proposed by numerous politicians and EU think-tanks, is to break down the models to a single one, thus ensuring more cooperation and harmony to EU military system, in view of a future common military.

Toward this direction goes the PESCO – the new plan by EU Member States to step up the European Union’s work in military area, planning to increase investment in defence and cooperation in developing defence capabilities are key requirements to achieve it – and other projects.

In light of this, the benefits strongly outweigh the costs. If Europe really intends to be a World superpower and thus play a vital role in World politics, then the true solution is to finally form a European Army. It is time, therefore, for the EU to step up and speak with a single voice, both in military and in diplomacy matters.