Vocal Europe: Are you surprised by the presidential elections’ outcome that Mr Trump becomes 45th president of the US?

Cornelius Adebahr: Given that nearly all polls pointed to a win by Hillary Clinton, there was indeed an element of surprise to Donald Trump carrying the electoral college. However, a lot of post-facto explaining has helped to understand the domestic dynamics in the United States, while the president-elect’s international intentions are still mostly unclear. While his promise to undo or, at least, renegotiate the Iran nuclear deal was one of the few foreign policy goals he voiced during his campaign, he has not addressed it since election day. 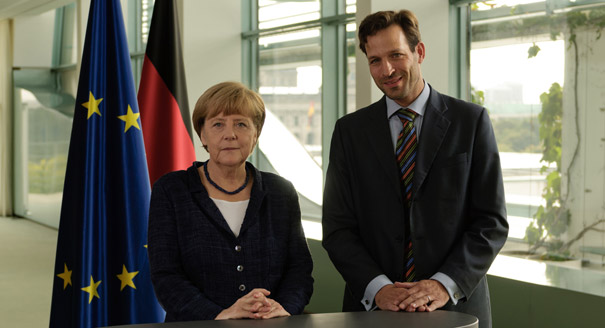 Chancellor Merkel and Adebahr – Video Podcast of the Chancellor 2014.

VE: How is the victory of president-elect Trump perceived in Tehran? Is the regime feeling threatened with the language used by Trump?

CA: There are different sides to how Iranians have reacted to the election of Donald Trump, depending on whether these were official statement or unofficial ones, and whether these came from government officials, parliamentarians, or representatives of the system. More generally, the regime does not feel threatened by Trump’s rhetoric; instead, it may feel emboldened. Different from a few years ago in the dispute over Iran’s nuclear program, the international community does not present a united front towards the country. Tehran does not have to fear that Europeans, Russians, and Chinese will rally around the US as they did when setting up the international sanctions infrastructure between 2006 and 2012. Rather, Iran will be too happy to see Washington emerging as the isolated power, given that today even its Arab Gulf neighbors have declared their support for the nuclear deal.

VE: What is your take on the elections’ result and its overall implication on the US-Iran relations in the coming months and years?

CA: Given Mr Trumps erratic eruptions, it’s hard to predict anything, let alone precise policies of his. At best, he – or rather, his administration – will be able to use this uncertainty to America’s advantage despite his impulsive, sometimes condescending style going down badly in Tehran. At worst, he will let himself provoke into actions that are detrimental to both the US interest and regional stability.

VE: Mr Trump called the Joint Comprehensive Plan of Action (JCPOA) – known commonly as the Iranian nuclear deal – as one of “the worst deal” he has “ever seen” and declared that his priority would be to “dismantle the disastrous deal with Iran”.  Should we expect any major changes in the ongoing US-Iran relations, particularly in the nuclear deal?

CA: Already, the outgoing CIA chief – certainly no dove – has publicly warned the president-elect not to nix the deal. America’s European allies are likely to also press home this point, as could be the more reasonable people in a future Trump administration (like his designated UN ambassador, Nikki Haley, whose mainstream-Republican opposition to the deal could be mitigated once her work in New York begins in earnest). Even though, much will depend on Trump’s eventual choice of Secretary of State. In the end, while the US public is by and large against the deal, dismantling it is not high on its agenda. To score points with his voters, Trump may therefore opt to be ‚tough on Iran‘ on regional affairs including its missile program. While strictly outside the realm of the JCPOA, any decisive action in this regard may be perceived – or construed – as undermining the deal. Already Iran has begun to frame the vote by Congress to extend the Iran Sanctions Act (which was up for regular review and is not part of the nuclear deal anyway) as a violation of the JCPOA. Washington will need its allies and partners by its side to win such arguments rather than put them off through unilateral steps.

VE: High Representative Mogherini paid a lot of efforts as well to bring P5+1 countries in order to find a diplomatic and a peaceful solution to the Iranian nuclear issue. In addition, we know the fact that many European, particularly German larger-size companies are planning to invest in Iran. Referring to Mr Trump early statements vis-a-vis JCPOA, do you expect any shift from the EU’s position regarding the ongoing engagements with Iran?

CA: Again, there’s a difference between what the EU and its member states may or may not do, and what European companies will do. The latter will certainly not feel encouraged to more seriously pursue their business openings in a climate of prolonged uncertainty, if not outright hostility towards Iran. Add to this the incalculability of the businessman Trump: Given that the US sanctions regime against Iran has never been free from allegations of privileging American companies over European ones, some people might second guess the next president if he goes after European companies more aggressively. The EU and its member states in contrast will have to make it clear to Mr Trump that the nuclear deal is meant to stay – not because European companies want to benefit from it but because it makes the Middle East safer (just a little, but that’s still welcome) and preserves the non-proliferation regime.

*Cornelius Adebahr is a nonresident fellow at Carnegie Europe. His research focuses on European foreign policy in a broad sense, from integrating the Western Balkans into Euro-Atlantic structures to the European Union’s role in the negotiations over Iran’s nuclear program to the impact of the economic crisis on Europe’s global role.