Vocal Europe: Despite many predictions that a large number of experts in the western world forespeak about Russia, Putin has always surprised many in the EU regarding his foreign policy preferences. What are Russia’s foreign policy options in short and mid-run particularly regarding Syria and Ukraine?

Richard Giragosian: Clearly, Russian policies under President Putin have been driven by two underlying objectives.  First, on a local level, the goal is to reassert its power and influence within the former Soviet space, or so-called “near abroad” (blizhneyezarubezhye ближнеезарубежье), which it sees as its “natural” sphere of influence.  This has also been evident in moves by Moscow to “institutionalize integration” of the former Soviet states, as seen by the formation of the Eurasian Economic Union (EEU) and foundation of the Collective Security Treaty Organization (CSTO) as instruments for a deeper, Russian-dominated reintegration model. 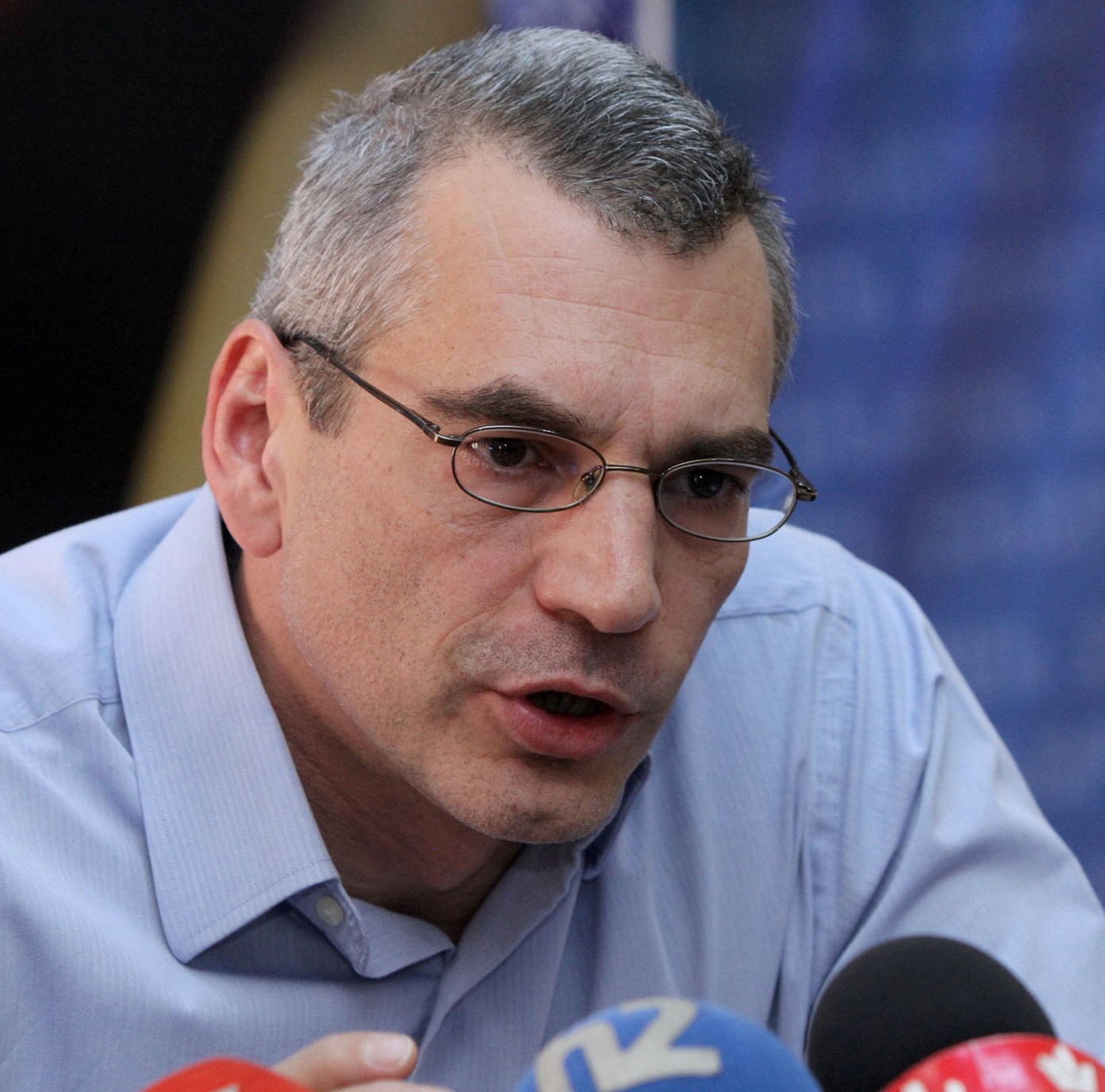 Richard Giragosian is the Director of the Regional Studies Center (RSC) in Yerevan, Armenia

The second objective is more strategic, and stems from the Russian need to restore strategic relevance.  From this perspective, Putin is well aware of his limits, and is not necessarily attempting to regain “superpower” status, but is instead rebuilding Russia as a “great power.”  And this broader pursuit has only been exacerbated by a profound sense of resentment and a perception of a lack of respect for Russia and its interests. This also drives the pattern of a more aggressive and confrontational military posture, which includes repeated violations of airspace and territorial waters of several European states.  Russia’s bid to demonstrate its own power projection in the Syria theater is also part of a more ambitious agenda to return as a player in the Middle East, and which will also include engaging Egypt and Libya, as well as Iran. For Putin, pursuing this objective has been both personally important and politically impulsive, as demonstrated by his startling and reckless behavior over Crimea and eastern Ukraine, which has only upset the Western assumption of a rational actor in Moscow who would follow a logical “cost-benefit” approach.  Rather, Putin has tended to test Western resolve and reaction at every step, only escalating his moves where the Western response has been one of weakness or division.

Yet there are inherent limits to the longer term sustainability of this set of Russian policy preferences beyond the former Soviet borders.  First, Russia is still acting from a position of weakness and not strength, where it is quickly approaching a degree of over-extension, surpassing its own capacity for sustainable power projection, especially in the Middle East.  This will most likely trigger a period of retreat and retrenchment, with a force posture based more on pressure than presence, and replaced by a reliance on indirect influence, through arms sales, for example.  Second, the viability of Russian objectives now faces a new obstacle of greater Western attention, which has belatedly, but boldly begun to awaken from its strategic slumber.


Against the backdrop, however, Moscow’s moves to reassert itself in the former Soviet space or “near abroad” seem fairly successful.  Much of that “success” stems from both the limited leverage of Western policy instruments and the uncertainty and unpredictable nature of the Trump Administration.  Moreover, with the outlook for the Trump Administration’s approach to U.S. foreign policy clouded by a new sense of unpredictable change, there is a profound sense of expectation and exasperation over the integrity of the U.S. commitment to allies and alliances.  And as Moscow has understood, there is deeper doubt over the security of relying on a new transactional U.S. foreign policy.

Thus, the risk is from a possible new “Russia First” approach, with Washington pursuing a more cooperative relationship with Moscow based on shared interests, such as engaging in a mutual campaign against Islamic State (ISIS), as any move by the U.S. to re-engage Russia as a strategic interlocutor would be based on an undeserved recognition of Russian power and influence. And on a broader level, any such shift toward embracing Russia without any change in its policy would only reward the more assertive Russian stance, thereby accepting a consolidation of Russian power and position within the former Soviet space.

Thus, the underlying concern over a possible American accommodation of Russia stems from the danger of a new U.S. approach that would only reward and possibly encourage an aggressive, re-assertive Russia, especially in the wake of its seizure of Crimea and its backing for a military campaign in eastern Ukraine directed against the Ukrainian government. And in light of a resurgence of Russian power, matched by a pattern of aggression and outright war in Ukraine, the danger of such a weaker U.S. approach raises fear of a risky policy of appeasement with little or nothing in return from Russia.

Vocal Europe: There is a general perception in Europe that Russia has intervened in national elections of many EU member states so far and will keep intervening whenever it can. Is this a paranoia or does this concern have a real ground? Many experts and politicians in Western Europe underline that President Putin supports the far-right and populist parties across the continent to expand their base. As a matter of fact, the recent meeting between French far-right politician Marine Le Pen and Putin has triggered another wave of concern where many in Europe tend to associate the rise of far-right to Russia’s ambitions for Europe. What is your take on that? Is supporting far-right sentiment in Europe a tool that President Putin hires?

Richard Giragosian: Actually, the perception of Russian intervention in national elections is both justified and somewhat exaggerated.  As seen in the lingering questions over Russian interference or even intervention in the U.S. presidential election, there are justifiable ground for concern.  But examples of such Russian activity, ranging from financial support for far-right candidate to efforts to undermine more traditional parties, require a more conducive “breeding ground” within these countries.  And sadly, the rise of populist and extremist political tendencies in many Western states has offered an opportunity to maximize or magnify an undercurrent of discontent often directed against incumbent parties and leaders.

But the Russian goal of these political “psychological operations” is not necessarily to ensure the election of the “far right,” but rather to undermine the trust and confidence in the political system as a whole.  And this move to erode the fundamental pillars of the Western model of democracy represents a far more serious threat.


Vocal Europe: How do you evaluate the recent wave of demonstrations in Moscow and other major Russian cities where thousands of people hit on the streets for anti-corruption protests? Is this not astonishing in the sense that so many people can still protest under the current regime in Russia? More importantly, can we expect that these protesters can form an opposition bloc against Putin in the coming months and years?

Richard Giragosian: Russia is no stranger to discontent, and even Putin has faced protests and demonstrations in the past.  While it is important to neither under-estimate or under-appreciate the impressive nature of this recent wave of demonstrations (ad the personal courage of the demonstrators), there are two significant observations.  First, the dynamic nature of these protests is driven by the spontaneous sense of outrage over egregious corruption, especially among the ruling elite. But from a political context, a spontaneous display of opposition to political corruption does not necessarily translate into a strategic demonstration of political opposition.  The record of political change in Russia is very specific, and has always been based only on a slow and gradual erosion of power from within.  And this only suggests that while Russia is likely edging toward a new “tipping point” of instability, the likelihood of successful political change by an organized and coherent political opposition is an unlikely scenario, with little real precedent.

Vocal Europe: Many argue that Moscow’s main current concern and policy driver is the beginning of the long cycle of low energy and other commodity prices. The sharp drop in the oil price has markedly devalued Russia’s geopolitical importance vis-à-vis its principal customers in Europe and Asia. The idea of an energy superpower, popular in the mid-2000s, has been finally and completely dispelled. To what extent, do you think, will this setback have an impact on Russia’s security spending in the coming years?

Richard Giragosian: The Russian energy sector has long served as the basis for both the steady expansion of Russian power over its neighbors and for a more re-assertive state domestically.  And the unexpected decline of global energy prices has seriously undermined the very foundation for sustaining and extending Russian power, the structural resiliency of Putin’s Russia is now under severe strain.  Like many (if not all) resource-rich “trust fund” sates, Russia’s traditional reliance on energy wealth to fund an extensive but expensive patronage network now faces no real alternative or replacement.  This will also weaken the Russian state’s capacity to co-opt and coerce rivals and constrain efforts to utilize energy as an instrument of leverage.

But over the short-term, the dependence of other former Soviet states on imports of Russian natural gas will still provide an effective way to protect and preserve power and influence over its neighbors.  And externally, it will drive an expansion of global arms sales, perhaps at cheaper prices to expand its market share.  But the future of the Russian defense industry and the course of defense reform will become the first casualties of this economic vulnerability, especially given the lack of any real diversification beyond a reliance on global energy prices.  For the West this will pose a daunting threat, however, from a Russia that is weaker and more unpredictably reckless and, therefore, an even more dangerous rival.

Richard Giragosian is the Director of the Regional Studies Center (RSC), an independent “think tank” in Yerevan, Armenia.