Two events have weakened Spain’s reputation in the last month. The first one is the case of the €4 billion submarines that are too big for its own dock – after the modification that allowed them to float.

The other one is the Spanish Supreme Court second dropping of the international arrest warrant against Catalan exiles, after the Schleswig-Holstein High Court in Germany rejected the extradition of Carles Puigdemont on either rebellion or sedition charges. Both cases have in common the repeated failures, as well as the extreme sloppiness of the authorities handling them.

In the latter case, the arrest warrant concerned the former Catalan ministers exiled in Belgium, Switzerland and Scotland, who still face sentences of 25 years if they return to Spain within twenty years. The Spanish High Court had dropped the European Arrest Warrant in December, a few days before the Brussels Council Chamber had to render its decision.

At the same time, six other former ministers, the former President of Parliament and two political leaders remain in Spanish jails awaiting trial – for over nine months already – for the very same charges dismissed by the German Court.

No reason, other than political belief, justifies the maintaining of an indictment after a Court in a Member State of the European Judicial Network has disregarded it. However, some Spanish commentators on the Catalan issue seem to find customary that a judge bases his decisions on political motivations instead of facts:

“…if he [Puigdemont] is only convicted for embezzlement [sic] would also make it possible for him to be re-appointed President of Catalonia.”

Instead, it does not surprise many observers that a Supreme Court judge endorses a private accusation made by an ultra-right-wing party.

Although the Schleswig-Holstein Court permitted an extradition of Mr Puigdemont due to the accusation of misuse of public funds, it seems that the Spanish Supreme Court did not have enough grounds for that charge either – especially after the former Spanish government had publicly reassured that not a single euro of tax payer’s money had been used for the Catalan independence referendum. When the German Tribunal, going by the book, decided to leave the burden of proof on this matter in the hands of the Spanish justice, the latter was not able to hold it. 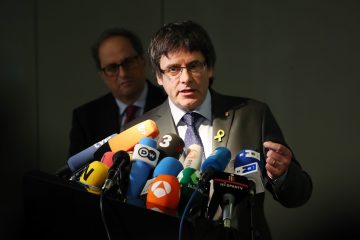 Puigdemont is back, what is next?

Alessio Tardivo
Inside Europe
On Saturday 28 of July, the former President of the Generalitat de Catalunya Carles Puigdemont came back to Brussels after being detained in Germany.
His return to Belgium was possible after the Spanish… Be More Curious…

Here it is necessary to remark that, even though the misappropriation of public funds is a much milder crime than either ‘rebellion’ or ‘sedition’, the figures shown by the Spanish judge Llarena might have kept Puigdemont in jail for 12 years – if proven.

Before the German Court decision, the Brussels Council Chamber had rejected the European Arrest Warrant – reactivated with the sole purpose of arresting Puigdemont in Germany, a country apparently considered, in the eyes of the Spanish justice, more sympathetic to Spain’s interests.

In this view, the lack of separation of powers in Germany had to be like in Spain, where the former Minister of the Presidency accused the new government of having allowed the Catalan prisoners to be in jails closer to their families. After seven years in power, she certainly must know how close are judge’s decisions to government desires.

Nevertheless, and despite the blatant evidence of no crime being committed, the new Spanish government has failed to condemn the pre-trial imprisonment of the Catalan politicians. It was also unable to criticize the controversial judicial rulings that prevented the imprisoned politicians from attending the regional parliament sessions. It looks like the Spanish main political parties compete with each other to be the strongest defendants of the central power supreme authority.

The Schleswig-Holstein Court ruling rendered the current pre-trial proceedings unlawful. Keeping these people in jail, the Spanish High Courts deviate from the European legal practice. It looks like the darkest reaction forces maintain a strong grip on the Spanish judiciary system. As the Spanish poet Luís Cernuda once wrote, they live, among ignorance, superstition and intolerance, in its own Middle Ages.