The lack of independence of the judiciary system, its sloppy performance, as well as the lack of control of rent increases by the successive governments, remain rampant in Spain.  All of these are exemplified by a recent case on a mortgage paperwork tax. In this and other events, the banks’ impunity contributes to a new real estate bubble fuelled by local and foreign investors.

Much to the dismay of millions of homebuyers, a “final” judgment of the Spanish Supreme Court that deemed illegal a tax on mortgage paperwork, was reversed by the same tribunal in less than twenty-four hours. Although the sentence was well-grounded on the existing law,  which stated that banks – and not the consumers – were the ones that had to pay a tax on notarial documents, the reversal statement offers no other reason to dismiss the previous judgment rather than its “enormous consequences”.

The Spanish high tribunal is doing the same legal aberration it did years ago regarding bank liabilities on mortgages until the European Court of Justice (ECJ) overturned it in 2016 and made claims by consumers fully retroactive. As the legal expert Raymundo Larraín Nesbitt pointed out, Spain’s Supreme Court bias towards lenders is explained by the professional ties of most of the court members with lending institutions.

Many other legal experts also criticise the reversal, including a former president of the Spanish Supreme Court who quotes another ECJ sentence of 1995 that stated that the economic consequences of the illegality of a tax do not justify putting limits to a judicial judgment.

Consumer associations described this sudden dismissal of a verdict that took years to be pronounced as “embarrassing”, “odd”  or “inconceivable”.  An involvement of lending institutions is suspected. The PAH (Platform for People Affected by Mortgages), a social movement fighting for housing rights in Spain, goes even further and talks about “Supreme shame”.

Among the very few political leaders who dared to support the Court’s U-turn, there is the Popular Party’s new president and new opposition leader, Mr Pablo Casado who thinks it is necessary to uphold, at all costs, the honour of all the Supreme Court members, currently involved in the trial of the Catalan political prisoners. He also considers that the tax, transferred to the regional governments, should be suppressed. 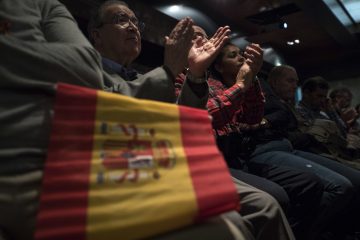 OPINION — VOX: the ultra-right enters the political game in Spain

Alejandra Finotto
Inside Europe
(adsbygoogle = window.adsbygoogle || ).push({});
Given the ascent of ultra-right political parties such as the “Rassemblement National” led by Le Pen in France, or the “Lega Nord” headed by Salv… Be More Curious…

The current Spanish government has found a slightly different solution that looks -at first sight –  more liberal.  Its main idea is that the law – written in 1993 by another socialist cabinet- was not clear enough. So a new decree now enforces that banks shall pay the mortgage contract taxes – from now on.

As in Casado’s suggestion, the new law does not provide any retroactivity.  Hence, the government tries to rule out any claim to the enormous amount of money that according to the Supreme Court -at first- was owed by the banks. In this way, both the financial institutions and the global markets have been appeased.

However, it is widely accepted that, from now on,  the banks will pass the extra costs of mortgage paperwork along to their customers either through higher interest rates or through new fees. Since there is no government regulation on these matters, the same would have happened in the case of no reversal of the judicial decision. But €15 billion would have come back to their legitimate owners.

And meanwhile, a few weeks after the scandal,  a constant shower of news related to irrelevant facts has removed this issue from public discussion. But what most people are noticing is that prices of both property and rent are increasing, and not only in the main tourist centres. The most troubling figure is the house price to income ratio, already close to the levels of 2008, not only because of the rise of property prices but also because of the decrease of personal income.

Some weeks ago a former Spanish Finance Secretary feared that, in the case of retroactive payments to homebuyers, the higher costs of mortgages would slow down the real state market. He was giving for granted that the banks would just pass the costs to their customers:

“Also, the real estate market would suffer significantly, with more expensive mortgages and the consequent fall in housing demand. (…)  the lower demand for workers in the construction sector, the smaller multiplier effects on other areas of activity and the lower profit obtained by the banks would all be insurmountable economic losses.”

This coincidence between the thought of the Spanish policymakers and the view of the banks is quite remarkable.  It is not surprising that the Spanish banking system has shown in the recent history an enormous capacity to influence public institutions. This explains why only 8% of  Spain’s banking bailout money has been returned, and how it is assumed that 80% of the total will never be repaid.

With no share of the crisis losses, the banks feel encouraged to continue granting mortgages with minimum requirements. Even during the worse years of the financial crisis, banks were issuing leases in Spain up to 80% of the appraised value. And recently they are financing even more than that.

The last banks’ bailout had significantly contributed to the increase of government debt in Spain – almost three times now than what it used to be in 2007 when the financial crisis started. At that time, such an amount of debt was considered unsustainable, and that was the reason why austerity policies were enforced – and they remain in place.

Under these conditions, an aftershock of the 2007 property crash would have disastrous consequences not only for Spain but for the whole European economy.  It looks like the Spanish banking system has been casting a long shadow over both the government and the judiciary. Let’s see how European justice reacts.