The times when the Law protected their citizens are passed away. With more than a century ago, nobody would ever thought after the falling down of the Czarist Imperium that a Law could be given in order to protect the criminals and not the people.

That neither distinction from a monarchy, nor equality of republic, not even the fear in a tyranny could longer inspire  the form of government; but, a Law for criminals and new principles given in order to form a totality.

The Russian Revolution from October put an end to the czarist tradition and established the dictatorship of the only Party, Lenin’s party. Soon after the arrival at power of Bolsheviks, new criminal codes were adopted which opened the road for the mass procedures of extermination. The legalization of crimes by analogy was the natural consequence of changing the Penal Code and abolishing the principle of legality, which missed from the Soviet Constitution of 1918, like many other individual rights.

In almost the same manner, National-Socialists will take the power in Weimar Republic, when a new Law adopted at 28 June 1935 proclaimed Hitler as führer and Reich chancellor[i]. This new Law provoked a real constitutional shook in Weimar Republic, like in the Soviet Union, by replacing the principle of legality with Führerprinzip which meant the ruling of the only Man, not of men, and his party.

Since then, men’s plurality confronted with the threat to be destroyed and replaced by a single Man, “the one-dimensional man” in the words of Herbert Marcuse. The spectacle on which has offered the streets in the last months in Poland and Romania caused by so-called judicial Reform, new legislative measures, together with the “purification”, cleaning up of Constitutional Court room from judges, too early retired, showed that the non-assimilated lessons of history might repeat again.

Warsaw’s streets, of Bucharest, filled with protesters which scanted “the Constitution”, “shame”, “without corrupts in functions” seemed to resemble even more with the Euromaidan protests from Kiev. In 2018, Warsaw’s streets, Victory Piazza from Bucharest were Euromaidan. Why the people have get out on the street in the night of 3 July, 10 August? For what protested and what they have received in return?

Since came up to power in 2015, the conservative party of Law and Justice (PiS) has started a purge of the field from all residual communist elements. Now looks more with those against which has started the battle, through his methods and legislative measures. 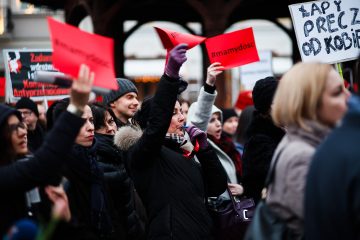 Clara Berthelot
Inside Europe
During his last visit to the European Parliament in Strasbourg, Mateusz Morawiecki, the Polish Prime Minister, gave a speech in which he addressed the critics made against the Polish state regarding its… Be More Curious…

A judicial disciplinary chamber bright new created seems to be the antechamber of the ruling party. According to New York Times, many judges who protested against the purge, changes of the Constitution were threatened, harassed and intimidated. One of them is Waldemar Zurek which was dismissed as judge and spokesman of the National Council of the Judiciary, after he received disciplinary sanctions.

Ex-judge Zurek confessed he was harassed at home by government agents, inclusive that has received death threats[ii]. But demonstrations of force and violence could be seen on the street with more than two months ago, when young protesters were detained and maltreated by police men without any explanation[iii].

As we already know from the lessons of history, the capture of institutions through violence until of the exclusion from public realm of those who formed a political opposition  was among the first steps of establishing a totalitarian rule. The Supreme Court president, Malgorzata Gersdorf, refused like many other judges to go home, even she has 65 years old and is on the black list of exclusions.

Justice Gersdorf argued her position by she stands for protecting the rule of law, also expressed her fears that Poland might lose everything has built in last 25 years after the falling down of Communism. Will Poland revive her past experiences?

The Brussels-Warsaw tensions amplifies around the changes of Constitution. Such that, Poland could be the first country which may lose her right to vote in European Parliament. In a similar political conjuncture is Romania, after the changing of Penal Code and vandalism acts from night of 10 August. It’s seen as a mistrust partner, unsure for Western democracies.

In conditions in which Romania should at the beginning of next year to take the Presidency of European Council, but is prepared for it? What happened in the night of 10 August that made her to turn back with almost 30 years behind?

In a torrid day, like any other summer’s day, the Romanian diaspora turned home for protests in Victory Square, to express her discontents in front of a corrupt government, of an empty building, without any representatives inside her, veiled in a Supra-realist light.

On that day, the government’s building appeared as being unreal, depicted from a parallel reality. Surrounded by troops of the Romanian gendarmerie, of guardians all dressed in black, armored from head to toe, in mission to protect an empty building, the public order from a coup d’état. Here, and there, ambulances are waiting as if a tragedy is about to happen[iv].

The protest starts up to five o’clock peacefully, in quiet manifestations. To the evening, unidentified instigators, provocateur agents named “hooligans”, infiltrated in the crowd and disturbed the public order. Suddenly two camps appear. One put in service of state, the other of freedom. Toxic gases, grenades, rubber bullets are used by gendarmerie for re-establish public order.

Among the protesters are children, elders. But that doesn’t stop the gendarmes to make use of their force and artillery. A peaceful protest has finished in tears, terror, and with more than four hundreds of victims, a resemble picture of June Mineriad of ’90.