One of the greatest novels of all times is ‘The Leopard’ by Giuseppe Tomasi di Lampedusa. It is set in Sicily during the Italian unification, as the old regime comes to an end. The main character, the Sicilian prince Don Fabrizio, is initially reluctant to the political transformation but he soon envisages that being part of the Risorgimento is the only way to keep his family’s aristocratic privileges. The book’s most famous phrase is “if we want everything to stay the same, everything must change”.

Spain is, to a significant degree, similar to Sicily. In fact, Sicily has been ruled by Spain for a more extended period of time than by the rest of Italy. This might partially explain why so many of Don Fabrizio’s observations can be used to describe the current Spanish spirit.

There is, for instance, that sense of superiority called pride by locals but that is nothing else – in Don Fabrizio’s words – than blindness. He believes his own countrymen do not want to improve because they think they are perfect. When some English military observers visit Don Fabrizio, he tells them “They [the northern Italians] are coming to teach us good manners. But they won’t succeed, because we are gods.”

When it comes to contemporary Spanish politics, this kind of pride plays an important part. The nomination of new Spanish cabinet members is an example. Besides the appointment of an astronaut as a Minister for Science – undoubtedly the highest skilled individual in the government- the rest of Sanchez’s choices has been more earthly. Let’s review some of them.

Take, for instance, the new Minister for the Ecological Transition, Mrs Teresa Ribera. As Secretary of State for the Climate Change, under Zapatero, she signed the Environmental Impact Declaration that allowed the building of an off-shore gas storage platform named “Castor”. The platform was closed in 2013 after being linked to more than 500 earthquakes on the Spanish Mediterranean coast. 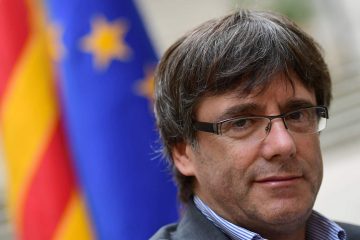 Bartolome T. Carvajal
Inside Europe
Last Thursday, the State court of the northern Schleswig-Holstein formally accepted the petition made by Spain, through a European Arrest Warrant (EAW), to extradite Carles Puigdemont. The former presid… Be More Curious…

Although the quakes were not wholly predictable, it is difficult to explain why the concession contract included a compensation clause of €1.3 billion, plus interest, in the event of closure – even if caused by negligence.

The compensation bill has been already paid with tax payer’s money to ACS, the company that built Castor, owned by the Spanish tycoon Florentino Pérez. The same amount will be billed to the Spanish gas consumers during the following 30 years. It is worth to mention that, before the compensation, gas bills in Spain were already the most expensive in the EU.

Then there is the new deputy prime minister and equalities minister Mrs Carmen Calvo. She recently described bullfighting as a “festival of freedom”, and has compared the recent events in Catalonia to a bullfighting show. As Minister of Culture, between 2004 and 2009, her administration was notoriously slow about returning private documents confiscated from individuals during the dictatorship.

Another known character is the new interior minister, Mr Fernando Grande-Marlaska, a conservative member of the judicature who acted as a hindrance to prosecute the Gurtel case, the corruption scandal that ultimately brought down Rajoy’s government. Grande-Marlaska is also known for denying any human rights transgressions in immigrant detention centres, for opposing changes in the dispersion policy concerning Basque prisoners, as well as for ignoring all reports of torture in Basque Country.

An older hand in politics is Josep Borrell, the newly appointed foreign affairs minister. He was already a minister twenty-seven years ago. Like several other former Spanish ministers -and despite his lack of experience in the private sector – he soon became a member of the Board of Directors of an energy corporation. In his case, it was Abengoa, a Spanish company founded – like the above mentioned ACS and many other oligopolies  – during the early days of Franco’s dictatorship.

A couple of years ago, Mr Borrell was sued over the extravagant compensation packages received by some board members, despite Abengoa being on the verge of bankruptcy. The Audiencia Nacional judge Mrs Lamela refused to prosecute him, disregarding that Borrell was the president of the Commission for nominations and remunerations. Mrs Lamela is the same judge that sent several Catalan political leaders, without a trial,  to ‘preventative’ jail.

Mr Borrell is a firmly convinced Spanish nationalist who attended meetings of Sociedad Civil Catalana, a unionist political organisation linked to the far right. When asked about the necessity of healing the wounds in Catalonia, he responded that Catalonia is a ‘sick country’ and before wounds can heal they have to be “disinfected”.

The Prime Minister himself, Pedro Sánchez, is also an example of Fabrizian pride. He recently proposed to change the rebellion legislation to accommodate it to harshly prosecute any actions resembling those that the last Catalan regional government did: holding a referendum and voting in the so-called autonomous Parliament.

In his opinion, it is more modern to link the rebellion crime to ideology rather than to violence. This is not surprising since Sánchez approved, along with Rajoy, the suspension of the Catalan autonomy, ignoring the call of UN independent human rights experts. As Don Fabrizio would say, the UN Human Rights Council’s attempts to teach them better manners did not succeed.

The difference between the times of Pedro Sánchez and Don Fabrizio is that Rissorgimento- the unification of Italy – was a project in synchrony with the times, whereas the use of force to maintain the status quo in Spain has become anachronistic. Furthermore, it is difficult to foresee how things are going to remain the same in Spain if not even a gesture towards change is made.