Bob Groome: Firstly, let me start off with the current political state of Catalonia and its people. Could you describe to us what the current mood of the Catalan society is today?

Meritxell Serret: Well, today, with the trial that has begun this week and since October 2017, the Catalan society are living through some shocking moments because the majority of its citizens are independentist. We feel that this judicial prosecution and repression against the legitimate political project and the prosecution against the members of the Catalan Government just for organizing a referendum in which more than 2 million people participated is wrong and is seen by most citizens as a persecution against themselves. So it’s a really shocking event to witness in a democratic country in this 21th century.

“At the same time, the immense majority of citizens of Catalonia, independentist or not, we all remain steady and committed in defending civil rights and wanting to resolve this political problem through politics, through dialogue in a peaceful and democratic way always and by letting people decide through a referendum about the future of Catalonia.”

I also want to point out that all the citizens and the government and all the institutions that we all continue to work for the development and for the prosperity of all the citizens, building a strong economy and for social and territorial cohesion of the countries. So we are shocked for the political situation, but we are determined to go on.

Bob Groome: How would you describe the current relations between the governments of Catalonia (Barcelona) and Spain (Madrid)? What do you think is the way forward for the two sides and will they be able to find a middle-ground?

Meritxell Serret: Well the relations between both governments (Catalan and Spanish governments) are not in a good place, after the government of Madrid decided last week to postpone the dialogue table because of the pressures the president received from mainly right-wing parties when both governments decided and agreed to introduce the figure of a facilitator of the dialogue and negotiations. After these pressures, he decided to stop the dialogue. Besides not giving support to President Sanchez and his proposed budget by the independentist parties strains the relationship between the two parties and of course opens up the possibility of new elections in Spain.

“Without a doubt the political instability will not help to advance in this necessary dialogue.”

But I still trust very much that the will to solve this conflict democratically and peacefully will prevail in both parties. Our side the Catalan government and independentists will always remain on this side of the dialogue and seek a democratic and peaceful resolution. And we will see in the following few weeks and months.

Bob Groome: This week saw the start of the trial of Catalan separatists in Madrid. It’s been said that the 12 Catalan separatists currently under trial could be sentenced to up to 25 years in prison for misuse of public funds and sedition. However, there are concerns about a fair trial taking place and about judicial independence. This comes just after the European Commission’s justice scoreboard, ranked Spain 28th behind Hungary and Poland due to the public perception of the independence of the courts and judges. Do you believe they will get a fair trial and is this characteristic of Spain’s legal system problematic? 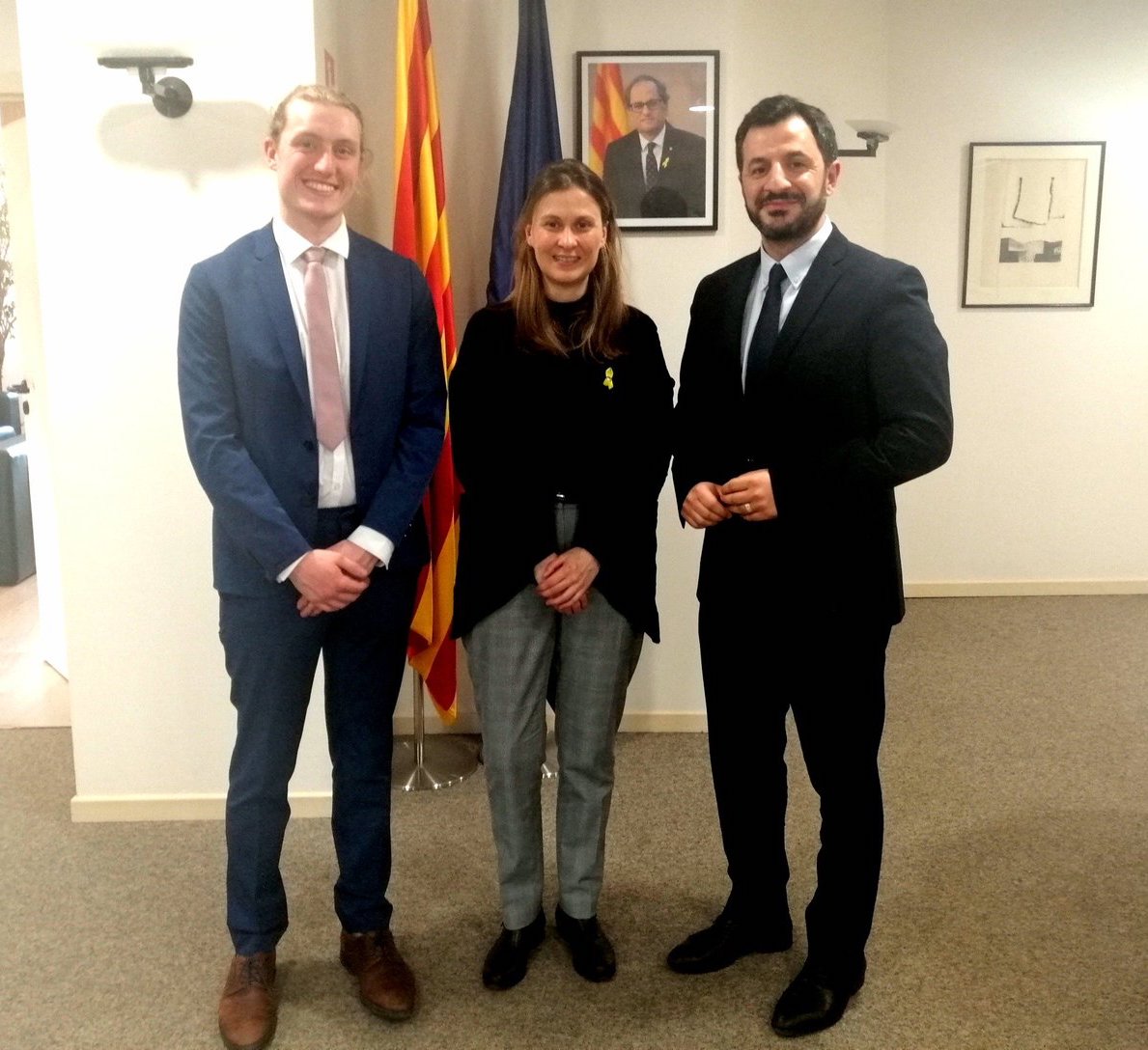 From Left to Right: Bob Groome, Meritxell Serret, and Ebubekir Isik. Representation of the Government of Catalonia to the EU. 14 February 2019. Photo Credit: Vocal Europe

Meritxell Serret: Oh, this is a complicated question, as citizens we have rights and we deserve to have the democratic institutions that are there to preserve and defend our rights to continue to do so.  However, what we have seen and felt since September 2017 is that some of our rights have been violated and that those violations haven’t had any response from many of those democratic institutions that should preserve them. Sometimes, even our violations have been endorsed by the same institutions as when the police used excessive violence against peaceful citizens in the referendum of October 1st.

In the case of the trial that has begun this week, we still defend that the accusations are unfounded. We still defend that it is unfair to demand 25 years of prison for organizing a referendum when the Spanish penal codes say that it is not a crime. It is unfair to ask for 17 years of prison for allowing a political debate on the right of self-determination into Catalan Parliament.

It is absolutely unfair to ask for 17 years of prison for ensuring that a spontaneous rally of thousands of people on the 20th December remained peaceful.

“This is absolutely unfair!”

It is of course also unfair to have had all these people for more than one year in pre-trial detention without any single fact to justify it. Of course, the Spanish judicial system has received warnings many years ago for its lack of impartiality and different international institutions have reported it.

But at the same time, I have to admit that there are voices from Spanish lawyers who have also demanded the need to reform this system and who have denounced the irregularities and the abuses that are being committed by the Spanish courts in the procedure against the independentist leaders. After all that, we and many more believe that the international courts will have to be the ones to end up solving the current judicial prosecution.

Bob Groome: The EU has been firm on its stance on Catalonia’s independence; believing that it is a national affair and that the EU shouldn’t interfere. Are Catalans disappointed by this, and, if so, why? Do you believe the EU should be taking a different approach?

Meritxell Serret: Oh this is also a complicated question, we are European citizens, we feel like European citizens and we (the Catalan independentist) are firmly pro-European. Of course, we believe then in all the democratic principles and fundamental rights in which the EU is based on. As European citizens, we believe that the European institutions must preserve and defend those rights. Of course, the European institutions have not positioned themselves regarding the judiciary prosecution, against the Catalonian political project or they haven’t positioned themselves regarding the violations of human rights that have been reported in Catalonia since 2017 more than one year ago. But after all we as European citizens will continue to claim for our human rights and we will keep working to build Europe and we will keep working to have these institutions that defend and protect our human rights.

Meritxell Serret: Well, the whole of the European Union is facing a time of profound change and we have many more challenges ahead. Challenges like globalization and climate change imply big policies are needed. So, we must be able to move towards a more federal Europe to tackle them and to be able to make a more accurate approach from every side of our diverse Europe in territorial and geographic terms.

At the same time, the aftermath of the crises that were caused by the neo-liberal policies, in my opinion, requires new visions that allow us to move towards a more social Europe, policies that put people in the center. In this sense, we think it is necessary to avoid the rise of populism, neo-fascist movements that are taking advantage of the disaffection of many citizens with the current policies or last year’s policies.

“In this context, our political project- The Independent Catalan Republic wants to contribute to making a more federal and more social Europe. We want to bring these policies closer to the citizens, we want to co-operate with all regions and countries and we want to put people at the forefront in order to be able to confront all those challenges together as Europeans.”

Bob Groome: Thank you so much for your time today Ms. Serret and your lovely hospitality.

Meritxell Serret: Well thank you so much for this chance to explain ourselves and of course the next time we can do this again, we would be very grateful for that. Thank you.