Both the current COVID-19 pandemic and new geopolitical dynamics have highlighted the need for a stronger, assertive and united European foreign and security policy. As emphasized in Ursula von der Leyen’s State of the Union speech, the need to ‘advance a stronger Europe in the world’ is more crucial than ever. French President Emmanuel Macron has also recently called for a ‘strong, sovereign and united’ Europe, ahead of France’s EU presidency (FPEU) in 2022.

Thus, the European Union is facing challenges of different nature and on multiple fronts. Beyond the EU-China-Africa trialogue which has benefited from the momentum created by the pandemic, the Union’s relations with both partners creates challenges and opportunities. Sometimes an ‘economic competitor’, sometimes a ‘negotiating partner’, China will be at the centre of concerns in 2022. The current flexible approach needs to adapt to new circumstances: global supply chain issues, protectionism and Beijing’s ‘divide and conquer’ method.

Regarding EU-Africa relations, the EU-AU Brussels summit in February 2022 should help ‘define key priorities for the upcoming years and could outline strategic and political guidelines’. There is a clear wish to strengthen the partnership to face the pandemic and the EU’s development aid is needed to leverage private sector investments –needed for the transformation of African economies.

The EU will also have to tackle foreign policy challenges in its neighbourhood, affected notably by the everlasting migration crisis and the rise of geopolitical tensions. While Belarus has been accused of purposely organising a refugee crisis, Turkey’s refugee influx is reaching its limits. Among FPEU proposals is the holding of political meetings on the issue and the setting up of an emergency reaction capability. These developments highlight the divide on how to manage Schengen’s borders. Still on the Eastern front, while tensions are high between Moscow and the West, there is a renewed debate on the EU’s attitude vis-à-vis Russia. In the tensed context between Ukraine and Russia, the EU’s response in early 2022 will be critical.

Finally, the EU’s position on the global stage is a growing concern for policy makers. In the context of a push for a ‘stronger’ Europe, the need for strategic autonomy has been highlighted by many. Moving away from the US security umbrella and progressing on the EU’s joint defence capability have been major concerns for the French President, who is likely to put a strong focus on these issues during FPEU. The new ‘strategic compass’ should also help unite EU nations behind a common foreign policy understanding and a shared security culture.

How will the EU frame its relationship with China? Will the EU-AU summit lead to a rapprochement between partners? Is the crisis in Belarus the last straw before a joint effort to reform the Schengen area? How will Europe respond to the escalation of tensions between Russia and Ukraine? How will the EU deal with the foreign and security challenges within its (immediate) neighbourhood? Will 2022 be the year of European strategic autonomy? To answer these questions and many more, Vocal Europe invites you to a Webinar on 26 January 2022 to discuss these major challenges Europe will have to face in the upcoming year. The panel will discuss and analyse these topics from diverse perspectives and exchange on the possible EU actions regarding these issues.

We would be delighted if you were to accept this invitation and look forward to hearing from you shortly. We remain at your disposal for any further information. 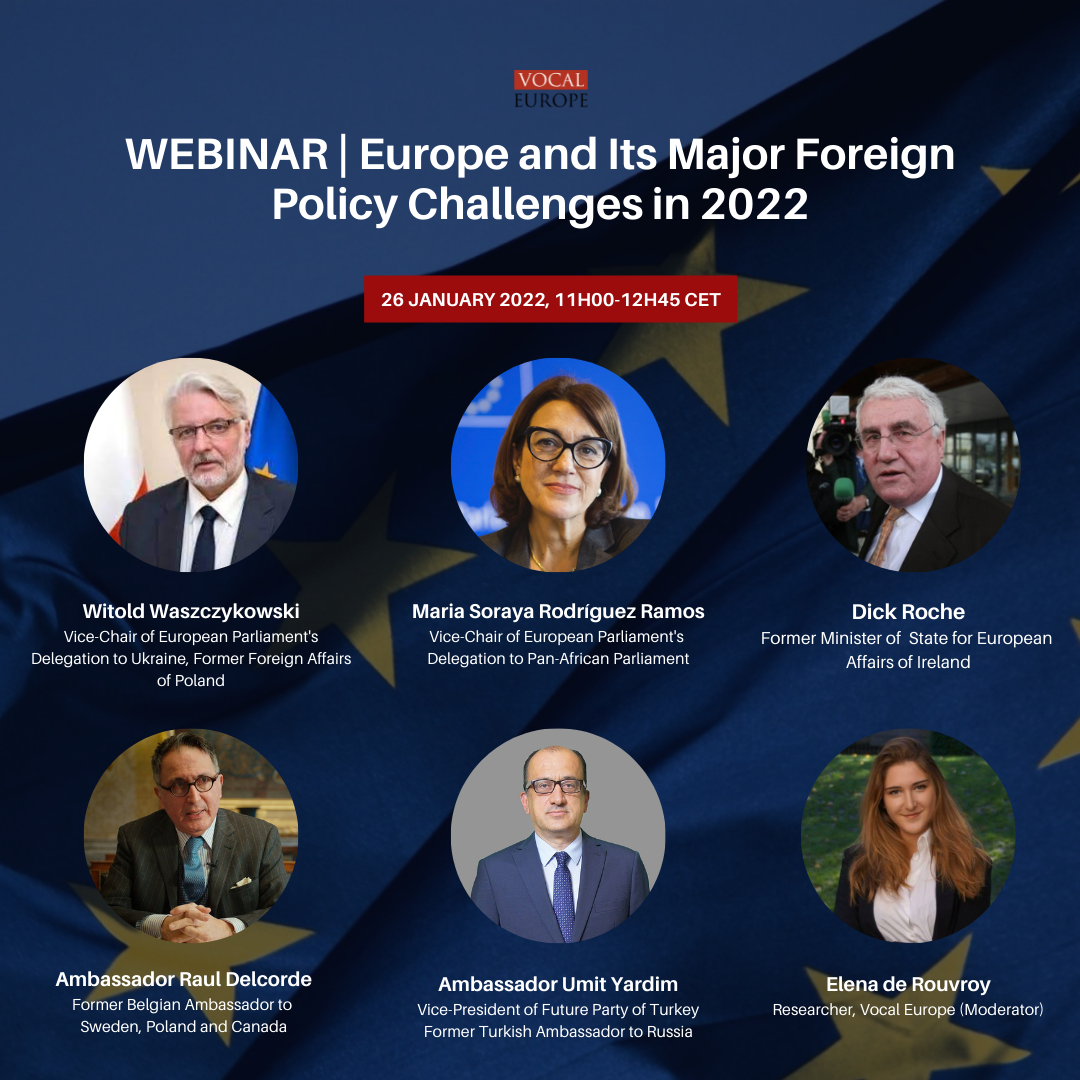 POLICY DEBATE | How will the War in Ukraine End – What Next for Ukraine, Russia, and the EU?