The politics of migration have triggered a resurgence of identity based appeals to the European populous. The political right, in particular, uses Christian values and heritage as a rallying cry against societal transformation, including against the perceived Islamisation of Europe.

In order to live up to their name, Christian democrats and those advocating for a revival of Christian values must learn to embrace tolerance, compassion and the peaceful coexistence of Christians, Jews and Muslims.

In the same speech Orbán advocated for the European People’s Party to “find its way back to its Christian democratic roots” in order to “defend our continent [and the European way of life] against migrants”. By demanding that “everyone should be wary of the idea of Islam being part of any European country” Orbán endorses a crackdown on NGO’s that “are in fact white collar people smugglers”.

Clearly, Orbán’s Fidesz Party is not alone in advocating this position. In 2016, Poland’s governing PiS Party expressed a reluctance to accept Muslim refugees. Its ideological leader Jarosław Kaczyński asserted that the majority Muslim refugees were bringing diseases such as cholera and dysentery to Europe, a claim promptly refuted by the World Health Organization[2].

With the ascendancy of Sebastian Kurz and the far-right FPÖ in Austria and the recent formation of the populist/right-wing coalition in Italy, these sentiments have now arrived in the heart of Europe. 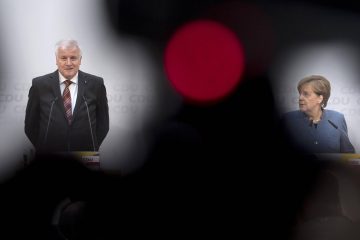 Julius M. Rogenhofer
Inside Europe
Scandalising improprieties in how asylum requests were processed at individual branches of the German Federal Office for Migration and Refugees is hypocritical because it overlooks the political context in … Be More Curious…

In Germany, the leader of Christian Social Union (CSU) threatens to strike a potentially lethal blow against the government of Chancellor Angela Merkel, herself a Christian democrat in the CSU’s sister party CDU[3]. Curiously, politicians claiming to defend Christian values and traditions have, at times, been rebuked by the very institutions they claim to protect.

In Bavaria, the CSU was criticized by cardinals within the Catholic Church, when it sought to require all administrative buildings in the state to brandish a crucifix[4]. In a jab aimed at Italy’s ruling coalition, Pope Francis came out similarly forceful against “those who shut their door” to refugees[5].

In light of such clerical criticism, it is perhaps legitimate to query the fate of Christian democratic politics. Situated at the center right of the political spectrum, Christian democrats are typically associated with a traditional approach to sexuality and the family. In this, they largely mirror the stance of Christian ecclesiastical institutions.

In the attempt to marry economic liberalism and religious conservatism, some parallels can be drawn between European Christian democratic parties and the early incarnations of moderate Islamist parties such the AKP in Turkey and the Tunisian Ennahdha Party. In both cases religious convictions soon gave way to electoral considerations and the machinations of party politics. In Europe, “Christian Parties” are starting to diverge between those who acquiesce in the gradual victory of progressive causes such as gay marriage, non-traditional family forms and women’s empowerment[6] and those who seek to reverse such developments[7].

What continues to unite many advocates of a “Christian Europe” is the opposition to societal transformations brought about by migration, especially in the form of refugees from Muslim majority countries. Christian parties differ in the severity of the measures that they propose to curb migration and the phraseology in which they express their concerns.

Yet, even in Germany the CSU has repeatedly used pejorative terms such as “asylum tourism” to describe refugees[8]. As illustrated in a stark manner by Orbán’s speech, a narrative of a civilizational struggle between enlightened Christians and backward, dangerous Muslims is constructed.

In alleging a fundamental incompatibility of the two religious traditions, politicians ignore centuries of history. There is a vast historical record of good relations between Muslims and Christians across Europe. Examples include the reign of the Norman King Roger II in Italy (12th century), the 13th century Holy Roman Empire under Emperor Frederick II and the period of “Coexistence” in Muslim Spain between the 8th and 15th centuries[9]. All three periods suggest that European history and culture was always rooted in the dialogue between faiths and traditions.

To see functioning coexistence and cultural compatibility, we do not need to recreate a “glorious past”. In European cities from London (whose current mayor Sadiq Kahn is Muslim), to Berlin, Brussels, Amsterdam and Stockholm people of all religions and traditions share the public sphere. In doing so they build bonds and bridges between their respective cultures. In a steadily globalizing world such connections will continue to expand and deepen, even as some continue to view these new unions with skepticism.

In light of this reality, Christian democrats must desist the siren calls of populism and right-wing bigotry. In order to avoid securitizing and dehumanizing the minorities in our midst Christian democrats would be best served to act with compassion, tolerance and dignity. In doing so they would both align themselves with the scripture of the New Testament as well as the guidance of Christian churches across Europe.

Fortunately, there is a role model for this political direction. In 2015, Angela Merkel’s calm and responsible answer to the challenges associated with refugee migration exhibited many of the characteristics of a true “Christian” democrat. In refusing to apologize for keeping Germany’s border open for migrants in the fall of 2015[10] and in continuing to acknowledge the multi-confessional reality of Germany[11] Merkel set an example for all Christians, not just politicians.

[6] An example of position is the aspiring CDU Minister of Healthcare, Jens Spahn. Jens Spahn, while openly homosexual, calls for a revival of conservatism in Germany. https://www.wp.de/politik/generation-spahn-kommt-jetzt-die-konservative-wende-id213625899.html

[9] The scope and consistency of the later is an area of contention among historians. Evidence of harmonious relations, including in the metropolis of Cordoba are widely accepted. https://quod.lib.umich.edu/cgi/t/text/text-idx?c=acls;cc=acls;view=toc;idno=heb30837.0001.001