Vicky Pathiakaki holds a Bachelor’s degree in Philosophy and Social Studies and a Master’s degree in Political Science (current democracies: nationalism, federalism and multiculturalism). Her main focus is on politics, immigration policies and territorial management strategies.

There are times when historical time thickens, and the importance of specific moments not only concern the narrow boundaries of a country but also spread out in space and time. Such a historic time was the decision of the renaming of Macedonia to North Macedonia and, with it, the solution of the Macedonian problem that has been so problematic for the parties involved and others, for decades.

Perhaps only the historian of the future will be able to objectively assess the outcome of this agreement. However, an outside look at the facts and the geopolitical data reveals to us that this is a good agreement.

At a critical moment for Europe, where there is an extreme rise of far-right nationalism and racism, in a tiny region such as the Balkans, this agreement comes to combine long-standing disagreements and ensure the peaceful coexistence of two peoples. No one should overlook these conditions and facts. We are constantly witnessing dangerous revisions, witnessing an attempt to divide people into “traitors” and “patriots” with all the consequences of such a division.

Under these circumstances, those who take the risk of reconciliation, not caring about the political cost, should be supported by all progressive forces at national and international levels.

The change of government in MACEDONIA (FYROM) and GREECE gave perhaps a unique opportunity for a solution that would stabilize the Western Balkans and such an opportunity should not be missed.

It is well known that imagination is a very pleasant place for someone to live in, but reality is always relentless. Their ideological opponents fought against the two governments, but, since politics is the art of feasibility and not desires, what would be the alternative if not that agreement?

Why does it seem preferable for MACEDONIA (FYROM) to stay adrift of third-party forces who prey on this region? Who, with their decisions, will contribute to the game of nationalism that seeks to perpetuate a problem regardless of the consequences?

It seems that external European forces are investing in the increase of Islamic fundamentalism in the region. Is it in the interest of Europe that such a core be created in such a vulnerable region? Or would it be better for MACEDONIA(FYROM) to be dissolved? Since when is civil war a proposal for the fate of an entire people?

Sections of the people of both countries expressed their disagreement over this deal. It makes sense that each side express its concerns, but it is an incorrect method to consider the agreement point-by-point because obviously the peoples of both countries will feel betrayed by each one of them. The agreement must be seen as a whole, and if so, both sides will realise that they have succeeded in achieving their crucial and long-standing demands. 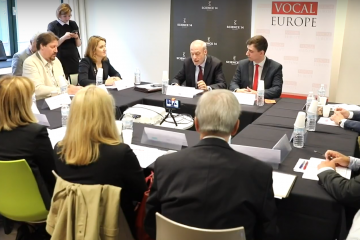 Report — The Western Balkans towards EU integration: what are the prospects and main challenges?

Alessio Tardivo
Western Balkans
Click for the Report
This report follows the event “The Western Balkans towards EU integration: what are the prospects and main challenges?” held by Vocal Europe on 19 June 2018 with the support of Science14. … Be More Curious…

Greece has achieved to elicit a compound name, with geographic definition erga omnes, that guarantees its non-appropriation by anyone of its serious cultural historical and cultural heritage. The name North Macedonia, states also clearly, to the rest of the world [most of whom knew only the country of Macedonia] that North Macedonia has only a northern part of the wider geographical area of ​​Macedonia, which part does not include the section where ancient Greeks such as Alexander the Great lived, as this section belongs to Greece.

Therefore, any moods of irrationality and appropriation of Greek history will now only find their place in the nationalist fantasies and they will not be able to take on public opinion. On the other hand, Skopje retains the identity of the people of their country that stems from their inalienable right to self-determination. An analysis of how the construction of history and language has led people to believe what they believe about their identity is the subject of another debate and not of the present.

This recognition contributes to political stability and is the core of the peaceful coexistence of the two populations. The Greek side, even being the biggest force between the two, did not impose its force, as the domestic right wing called for. It is a fact that only through war, and only if you are the winner, you can enforce your positions in absolute terms.

In any other case, if you want the solution to be sustainable, you must come to an honest compromise. A compromise that will not hurt the dignity of your opponent. And this is what the diplomatic forces of both sides have decided to do.

Thus, if the aim is the well-being of the two peoples, all forces should support this agreement, and miserable nationalism must give its place to politics and economic growth and prosperity.