After the division of Russian empire in the end of First World War[i], a new concept has appeared in the political field. Intermarium was the answer of newly independent states at the Eastern imperialism. At the beginning, the concept designate a regional cooperation between countries situated near by the Baltic and Black seas.

Poland, Ukraine, Lithuania and Belarus should have been to configure the structure of a union, federation, in order to protect their national sovereignty against the old threats of imperialism.

The Prometheus Age comes once with disintegration of Russian empire, later with the invention of atomic bomb, but and with this political project of creating the Intermarium federation made at the proposal of Polish state’s leader, Józef Piłsudski. Soon after 1918, nationalist movements arise as a proclamation of independence from both projects, Prometheism and Intermarium.

The ideal of creating a Commonwealth, Polish-Lithuanian, would not be then only the ideal of 16th– and 17th-century. A federal entity envisioned to unite countries from Oriental Prussia around the Baltic Coast, of the Black sea was also the ideal of 20th century.

Prometheus falls from the sky to create a new world by fire. 20th century could be called without any hesitations the century of titans, of political leaders which, as gods, believe that they can change the world by fire, to destroy it and to build up from the foundation a bright new world.

The political project of Józef Piłsudski, Prometheism, closely related to geo-political concept, Intermarium, reflects an omnipresent vision of the century. Which, starting up with 1930, was easily spread it in countries like Hungary, Italy, Yugoslavia and Romania by Polish minister for foreign affairs, Józef Beck. 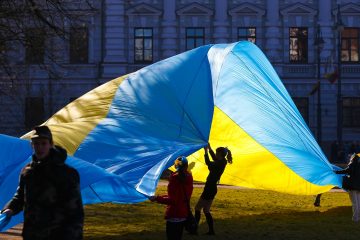 2019 Ukrainian elections, what to expect from Russia

Clara Berthelot
Russia
The Ukrainian presidential and parliamentary elections that are scheduled respectively in March and October 2019 are to draw our attention, especially taking into account the numerous Russian interferen… Be More Curious…

Today, the concept of Intermarium became Trimarium. Unlike the old concept, this new concept it refers to a cooperation that will transcend national borderlines of twelve EU member states situated along Baltic, Adriatic and Black seas. The ideal of unification, of creating a union, a federal entity do not disappear in nowadays. Le Nouvelle Europe, the new world, a Euro-Atlantic world will be united around energy, transportation, market and digital means of communication.

The Three Seas Initiative (3SI, TSI) preserved its historical origin. Like in the past, the need to consolidate the structure of a union came at proposal of Poland[ii]. Is not a random of fact that Poland takes again initiative. No other country lived in proximity of danger to lose her sovereignty. For a long time in history, Poland was a bridge between Russia and Germany. The need to protect her national sovereignty from the imperialism threats put it in difficulty to choose between East and West.

A Europe more united meant in the past, as in the present, a Europe more Western. The destiny of Poland was the destiny of many countries such as Ukraine, Lithuania, Romania, and others. Within their borders, the society was split between pro-Russians and pro-Europeans. Nobody would have thought, now many years ago, that today we will assist at the fragmentation of world. That this fragmentation will exceed national borderlines.

The answer at threats of the hybrid war is Trimarium. Europe, not only Poland, needs to fortify her position against the new threats from East. A road that goes via Prague it will link the North with South of European continent through via Baltica and via Carpathia, and will connect the member states around transportation, digital communication, the single market, but also around energy.

Discussions about energy independence of EU member states, about creating an alternative for the gas pipeline North and South Stream, so at Russian source of energy, were held last year in Warsaw at the second 3SI Summit. Then the United States president, Donald Trump, has sustained:

“The Three Seas Initiative will transform and rebuild the entire region and ensure that your infrastructure, like your commitment to freedom and rule of law, binds you to all of Europe and, indeed, to the West”[iii].

A commitment that will pass through energy by following the axis Berlin-Brussels-Washington.

Europe, and in an equal measure United States, offers an alternative on the energy trade and tries to replace all unhealthy dependence. This was confirmed by the presence of US Secretary of Energy, Rick Perry, from this year in Bucharest, at the third meeting of 3SI Summit. As by the attendance of Jean-Claude Juncker, the opening of Business Forum what will be destined beside the discussions around transportation’s infrastructure, digital communication, and for development of the energy trade[iv].

“L’Europe – comment dire – devrait respirer avec ses deux poumons: l’Est et l’Ouest. Si elle ne fait pas ça, elle perd son souffle”[v] said the President of EU Commission at the third summit, Jean-Claude Juncker. In his words, the Juncker plan pursues to open new corridors for the Union that will bring together countries from North and South of European continent, but not only, also from East and West.

As following to this development, Russia may become isolated on the energy trade in a close future. If Germany will renounce at her actual source of gas and close a partnership with United States, then Russia will lose a big part on the energy trade. Europe will breathe again through its two lungs, from East to West.

[ii] Tomasz Poręba, Via Carpathia – An Investment in the Future, The Warsaw Institute Review (March 13, 2018),

[iii] With regard to the statements made by Donald Trump at the second 3SI Summit held in Warsaw, in July 2017, visit the site of U.S. Department of State, Bureau of Public Affairs, Public Affairs Translation Hub (July 6, 2017), https://translations.state.gov/2017/07/06/remarks-by-president-trump-at-the-three-seas-initiative-summit-july-6-2017/.